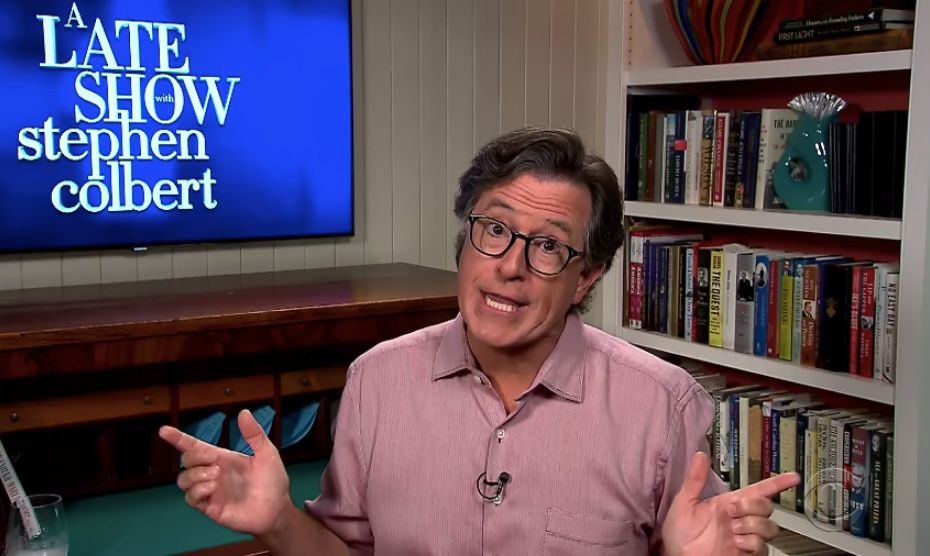 Tucker Carlson has been taking full advantage of Stephen Colbert’s staffers getting caught breaking into a House Office building by the Capitol, an event many conservatives have taken to calling an “insurrection” because of how the left has treated the January 6th incident.

Among those taking the hammer to Colbert most brutally over it, hitting him and hist team with the attack on “our democracy” jokes whenever he has the opportunity.

He did so again recently, using a Colbert staffer’s harassment of Congresswoman Marjorie Taylor Greene as an excuse to go after a Colbert team member and Colbert generally, first giving the background of the story and saying:

In fact, Jake Auchincloss has a recent history of condoning criminal behavior in the Capitol. Just this March, surveillance cameras in the complex caught Jake Auchincloss’ chief of staff, that would be a former Adam Schiff staffer called Tim Hysom, vandalizing the front door of Congresswoman Marjorie Taylor Greene’s Personal Office. Hysom did this not once, but several times, violently, like a man obsessed.

Capitol Hill police quickly filed an arrest warrant against him because Tim Hysom clearly posed a threat to a member of Congress. But Jake Auchincloss did not fire him. Instead, Jake Auchincloss defended Hysom’s vandalism as noble and justified. ‘Our office is not going to apologize,’ read a long and self-righteous statement from Jake Auchincloss. In other words, ‘We don’t like Marjorie Taylor Greene’s politics. Therefore, we can do whatever we want to her and we will.’

Explaining how that escalated into the assault on “our democracy” that Team Colbert launched at the Capitol, Tucker then said:

For the most part, the media ignored the story, so Jake Auchincloss and Adam Schiff felt emboldened to go further. They invited Colbert’s employees to the Capitol to harass Marjorie Taylor Greene some more, which is what they were trying to do when they were arrested by Capitol Hill Police.

And, finally, Tucker got to use the “democracy” line against the Colbert staffer, saying:

“Now, whatever you think of her politics, Marjorie Taylor Greene is a sitting member of Congress. Preventing her or any other member of Congress from carrying out official duties as a public representative is, by definition, an attack on democracy.

“So, how is what Stephen Colbert did different from what the protesters on January 6 have been convicted of doing? That’s a very good question, and it’s a question that Colbert himself spent the weekend thinking about. His conclusion? Well, unlike Trump voters, Stephen Colbert is a very good person. Therefore, any comparison to Trump voters is not simply ridiculous, it is a moral crime.”

In other words, the “rules for thee, not for me” thing for which leftists are known applies to Colbert too.

But that wasn’t all. Tucker continued to ridicule Colbert the woke, unfunny comedian, calling him a “Karen” and saying:

“We’re not trying to belabor the point, but the guy’s not a comedian. You watch a comedian, you think, ‘That guy’s hilarious, I’d love to meet him.’ Imagine eating a meal with Stephen Colbert. Chances are you somehow offend him over the course of a typical dinner by saying something he finds offensive. What are the chances of that? 100%.

“Stephen Colbert is a Karen. He’s a brittle, middle-aged woman who’s always lecturing you about something. In fact, he’s Elizabeth Warren! They even look alike. Have you seen them in the same room recently? No. Sad.

“He was talented at one point, so was Robert Smigel. That’s one of the Colbert employees who was also arrested last week. Smigel’s been doing his dog puppet routine for 30 years. That’s someone that Colbert is now hiding behind. ‘It was just a dog puppet!’ The dog puppet was kind of funny during the Clinton administration. It’s pure hackery now.”

Tucker is tuned in to which leftists are vulnerable and attacking them brilliantly. Hilarious!