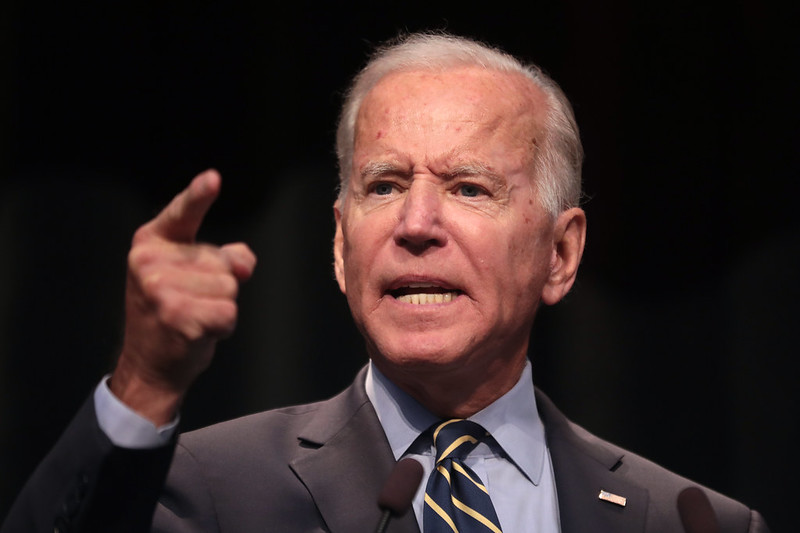 As incredible as it may seem, it’s been six long weeks since President Joe Biden has been honored as the week’s top knucklehead. Thanks to the likes of Amber Heard, Beto O’Rourke, and Apple Inc. with their windowless cars, we had to opt for alternative candidates. Additionally, if we were to select the president every week, we’d likely receive a tongue-lashing from our Department of Redundancy Department. But after a brief hiatus from our list, Mr. Biden has returned with a vengeance and was an easy choice this week.

Winner: President Biden can’t make up his mind whether to yell or whisper, but one thing we know for sure, he’s really mad.

One of the more amusing things about watching Joe Biden is his obvious social awkwardness. He’s a weird dude. Whether it’s watching him get touchy-feely with folks, particularly little kids, or watching him wander around a White House gathering trying to find someone to talk to him, we’ve become accustomed to his goofiness.

But perhaps nothing is more illustrative of Biden’s inelegance than his tendency to either shout or whisper at odd times. Such was the case this week when Biden made what was essentially a campaign speech at an AFL-CIO in Philadelphia. Watch this clip, and disregard, for now, the blatant lies that he’s shouting:

Why is he so pissed off? You’re President of the United States, for crying out loud, and you get this angry about criticism? What was completely ironic was that in the same speech, he was also bragging about his spending. So, you really come off as insincere, Mr. President, when one minute you’re boasting about spending to “help” the American People, and moments later you’re hollering about “I don’t wanna hear any more of these lies about reckless spending.”

Moments later, the president treated us to this sequence of talking points, when within five seconds he went from a creepy whisperer to a grouchy old man yelling at the neighborhood kids to get off his lawn. Watch:

The guy is just bizarre.

But Biden’s incoherent and lie-filled, ramblings and mutterings in Philadelphia weren’t the only examples of his knuckleheadedness this week. As usual, there were scores of others:

– The stock market absolutely crashed this week, dropping down below 30,000 points, meaning that all the market gains during Biden’s presidency are now gone. Yet Biden remained focused on “trans-ing” kids, when he signed an executive order targeting the ‘conversion’ of transgender kids. That means Joe Biden doesn’t want you telling little girls who think their little boys that they are just confused. That would be bad, according to good ole’ Joe.

– On Tuesday, we learned that his Administration would indeed be disciplining CBP agents for the non-incident last year in which agents were accused of “whipping” illegal migrants. Biden’s own DHS investigated the accusations and found that the agents did nothing wrong. The agents weren’t whipping people, they were reining their horses. But does that matter to Biden’s team? Of course not. So they’re going to discipline them anyway.

– Yesterday morning, the Washington Post’s Jeff Stein reported, “White House officials exploring sending Americans rebates cards to offset gas costs ran into another problem — the chips shortage, which meant [the] US couldn’t physically produce enough cards to make the plan work even if lawmakers tried to do it.” Seriously… you can’t make this stuff up.

– During an interview on Thursday, Biden “If it’s my fault, why is it the case in every other major industrial country in the world that inflation is higher? You ask yourself that? I’m not being a wise guy.” No, you’re certainly not wise. First of all, that’s not true, and in fact America, unsurprisingly, has one of the highest inflation rates right now amongst industrialized nations. But more importantly, Biden is also largely responsible for global inflation as well, thanks to his policies clobbering supply, particularly petroleum supply.

Indeed, President Biden had a rough week, but then again he’s had a rough presidency. And he deserves everything he gets. The man is not only a knucklehead, he’s an obnoxious, dishonest, and mean knucklehead. Let’s go, Brandon!

Honorable Mention #1: The Audubon Society teams with a drag queen for a pro-bird, anti-climate change video.

What do drag queens have to do with goldfinches and climate change? Nothing… or so we thought. Here’s the video, and our apologies if you have nightmares tonight:

This #PrideMonth, Audubon partnered with drag queen and intersectional environmentalist Pattie Gonia to bring you #BirdsTellUs: The Song of the Meadowlark, a message of hope for the future of our planet as we face climate change—if we choose to listen: https://t.co/RGHzJTXGgS pic.twitter.com/UxNW066NL4

Is that a dance he’s doing? Is that a poem he’s reading? And really, is that costume truly necessary? For those of you who support the Audubon Society, it may be time to reevaluate that contribution this year.

Honorable Mention #2: The chairman of the Democratic National Committee admits to not voting in his own primary election.

One of the most important aspects of leadership is to lead by example. And if you’re the chairman of the national committee of one of the two major political parties in the country, and it’s quite literally your job to get people to come out and vote, you had better be sure to vote yourself, right? Think again, and watch this admission by DNC Chair Jaime Harrison:

So, the Democratic Party tells us any attempt to tighten election security is racist. They also label any legislation such as voter ID laws as intending to disenfranchise black voters. But their own leader, who just happens to be black, can’t even get off his own ass to go to his polling station to get an absentee ballot? Is it any wonder the Democratic Party is in shambles?

P.F. Whalen is a conservative author at TheBlueStateConservative.com.  His work has appeared in multiple publications, including Human Events, the Western Journal, and American Thinker. Follow him on GETTR; he does not do Facebook and Twitter.