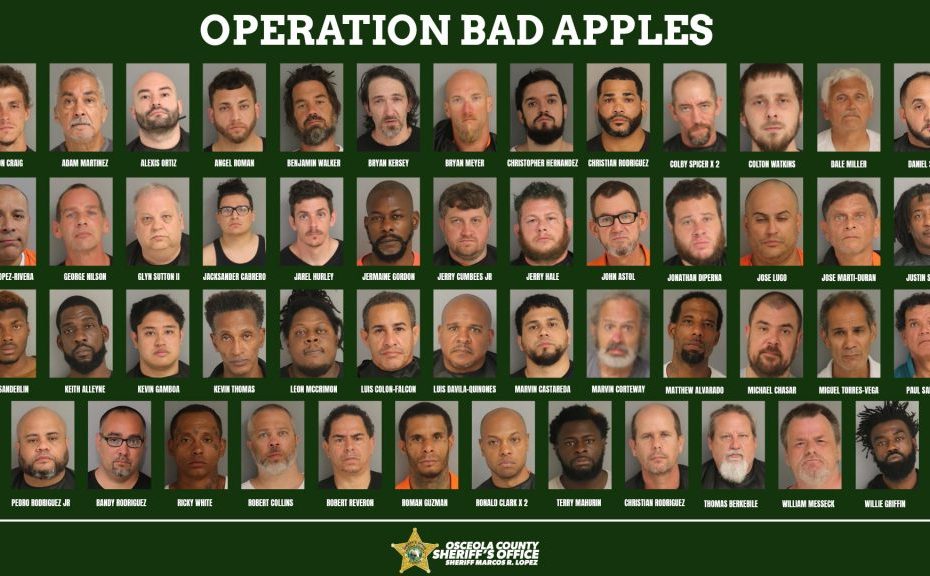 Though Biden is an utter disaster and the higher, political levels of federal law enforcement are seeming ever more like the Stasi or NKVD, lower-level law enforcement officers are still doing there jobs and winning some major victories in the war on crime, particularly the war against sex trafficking and sexual predators.

One such recent victory was won in Florida, where the Osceola County Sheriff’s Office worked with the United States Marshals in “Operation Bad Apple” to round up and lock up a massive number of sexual predators, with 56 being caught in the sweep.

The Osceola County Sheriff’s Office, commenting on the operation in a press release, said:

The Osceola County Sheriff’s Office in conjunction with the United States Marshals conducted Operation Bad Apple, which took place from March 28, 2022, through June 10, 2022. The operation had a primary focus, but was not limited to; sexual offenders and sexual predators who have prior state or federal convictions for production, transmission, and/or possession of child pornography/sexual performance of a child; transmission of harmful material to a minor; or video voyeurism.

Operation Bad Apple resulted in 56 arrests of sexual offenders and predators in reference to violations of their statutory sex offense restrictions and or new law violations. All arrestees were booked and transported to the Osceola County Jail.

So the office was able to lock up a number of creeps and deviants, particularly those involved in horrific sexual crimes or activity involving children.

The huge sweep, according to WESH, took place over about two and a half months, occurring from March 28th to June 10th of this year.

For more context as to the sickening nature of the crimes these 56 sickos were involved in, the Justice Department’s website describes child pornography as a type of child sexual exploitation, saying:

Continuing, and noting the horrific effect the internet has had on the already sickening child pornography market, the Justice Department says:

So at least a few of the people engaging in that are off the streets.

What is concerning, however, is that many of these men had been arrested for similar crimes before, as the sheriff’s office noted. Why were people who committed sexual crimes against children allowed back out on the streets at all, much less in a way that let them then go on to commit further crimes involving the sexual exploitation of kids?