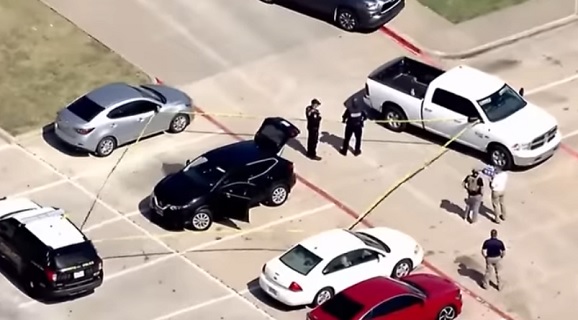 Texas police shot and killed an armed man who was firing shots at a gymnasium hosting a summer-camp like event that had about 150 children inside, according to authorities.

This took place in the Duncanville section of Texas and no children, staff, or police were injured during the incident that took place at about 8:45 in the morning on Monday.

USA Today reports that “The man entered the field house lobby with a handgun and fired a shot at a staff member during a discussion, Duncanville Assistant Police Chief Matthew Stogner said.

The gunman then tried to enter a classroom with children inside, but the door was locked, Stogner said. He fired one shot into the door, Stogner said.

The man then went to the gym, which also contained children, at which point Stogner said police arrived and shot the man in an exchange of gunfire.“

As of now, the police have not identified the suspect or a motive. The man  was transported to a hospital after the incident and pronounced dead.

The children and staff at the summer camp were sent to another recreation center to be united with parents and caretakers following the incident.

It remains unclear if President Joe Biden will mention this incident or thank the police for saving lives. Biden was accused of being divisive during his last speech revolving around an incident that involved guns, as previously reported.

President Joe Biden is accused of delivering a ‘divisive’ speech that was partisan in nature. The speech was in response to the mass shooting that took place at a Texas elementary school. Critics, however, were not happy with Biden’s speech as they believe he missed a chance to unite the country, but instead used it to attack Republicans.

I had hoped, when I became President, I would not have to do this again.

Another massacre. Uvalde, Texas. An elementary school. Beautiful, innocent second, third, fourth graders. And how many scores of little children who witnessed what happened see their friends die as if they’re on a battlefield, for God’s sake. They’ll live with it the rest of their lives.

To lose a child is like having a piece of your soul ripped away. There’s a hollowness in your chest, and you feel like you’re being sucked into it and never going to be able to get out. It’s suffocating. And it’s never quite the same.

And it’s a feeling shared by the siblings, and the grandparents, and their family members, and the community that’s left behind.

Scripture says — Jill and I have talked about this in different contexts, in other contexts: “The Lord is near to the brokenhearted and saves the crushed in spirit.” So many crushed spirits.

So, tonight, I ask the nation to pray for them, to give the parents and siblings the strength in the darkness they feel right now.

Since then, there have been over 900 incidents of gunfires reported on school grounds.

And the list grows when it includes mass shootings at places like movie theaters, houses of worship, and, as we saw just 10 days ago, at a grocery store in Buffalo, New York.

I am sick and tired of it. We have to act. And don’t tell me we can’t have an impact on this carnage.

I spent my career as a senator and as Vice President working to pass commonsense gun laws. We can’t and won’t prevent every tragedy. But we know they work and have a positive impact. When we passed the assault weapons ban, mass shootings went down. When the law expired, mass shootings tripled.

The idea that an 18-year-old kid can walk into a gun store and buy two assault weapons is just wrong.

What in God’s name do you need an assault weapon for except to kill someone?

Deer aren’t running through the forest with Kevlar vests on, for God’s sake. It’s just sick.

And the gun manufacturers have spent two decades aggressively marketing assault weapons which make them the most and largest profit.

For God’s sake, we have to have the courage to stand up to the industry.

I just got off my trip from Asia, meeting with Asian leaders, and I learned of this while I was on the aircraft. And what struck me on that 17-hour flight — what struck me was these kinds of mass shootings rarely happen anywhere else in the world.

Why? They have mental health problems. They have domestic disputes in other countries. They have people who are lost. But these kinds of mass shootings never happen with the kind of frequency that they happen in America. Why?

Why are we willing to live with this carnage? Why do we keep letting this happen? Where in God’s name is our backbone to have the courage to deal with it and stand up to the lobbies?

It’s time to turn this pain into action.

It’s time — for those who obstruct or delay or block the commonsense gun laws, we need to let you know that we will not forget.

We can do so much more. We have to do more.

Our prayer tonight is for those parents, lying in bed and trying to figure out, “Will I be able to sleep again? What do I say to my other children? What happens tomorrow?”

May God bless the loss of innocent life on this sad day. And may the Lord be near the brokenhearted and save those crushed in spirit, because they’re going to need a lot of help and a lot of our prayers.