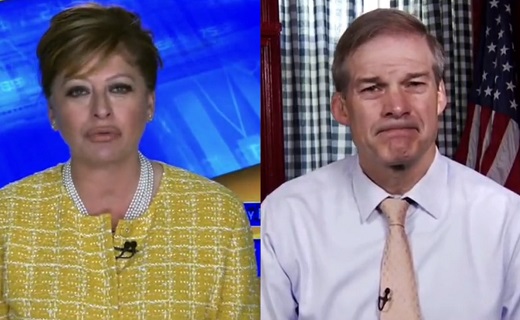 The congressman insisted, during an interview, that the hearing showed nothing new and cast the Jan. 6 committee itself as a “one-sided” endeavor that has demonstrated it cannot be outright trusted. Last year, the panel admitted to altering a text message between Jordan and former White House chief of staff Mark Meadows, he reminded the viewers.

“This committee has altered evidence and lied to the American people about it, so much so that they had to issue a statement which says, ‘We regret the error,’ which is government-speak for, ‘We got caught lying,’” told Jordan to Fox News anchor Maria Bartiromo on Sunday Morning Futures.

In December, it was revealed that Rep. Adam Schiff (D-CA), a member of the Jan. 6 committee, presented a graphic showing an altered text message between Jordan and Meadows. The congressman from Ohio did send the message to Meadows, as Jordan’s office acknowledged, but stressed that it was a snippet of a message he “forwarded” from Joseph Schmitz, an attorney, who was expressing a legal theory about overturning the results of the 2020 election.

An apology for the “error” came from the Jan. 6 panel, which was truncating the message with a period, and Schiff presenting it to the public without full context, per report.

A spokesman for the select committee said in a statement to the Washington Examiner: “The Select Committee on Monday created and provided Representative Schiff a graphic to use during the business meeting quoting from a text message from ‘a lawmaker’ to Mr. Meadows.

The graphic read, ‘On January 6, 2021, Vice President Mike Pence, as President of the Senate, should call out all electoral votes that he believes are unconstitutional as no electoral votes at all.’ In the graphic, the period at the end of that sentence was added inadvertently. The Select Committee is responsible for and regrets the error.”

Rep. Jamie Raskin (D-MD) also incorrectly described a message to Meadows describing a strategy to overturn the results of the 2020 election as coming from a House lawmaker.

CNN was told by anonymous sources that it was, as the news outlet put it, “an inadvertent error,” and a “Raskin source said the congressman learned of the error this week from CNN and confirmed the mistake with staff.” Raskin wrote a letter to correct the Congressional Record, according to the report.

House Speaker Nancy Pelosi (D-CA) blocked Jordan, along with Rep. Jim Banks (R-IN) from participating on the Jan. 6 committee, and the congressmen are now conducting their own counter-investigation. While Jordan was also subpoenaed by the panel but has refused to cooperate.

Jordan argued that the country “sees it for what it is — a partisan political activity,” although the Jan. 6 committee has two Republican members who are Trump critics, Reps. Liz Cheney of Wyoming and Adam Kinzinger of Illinois.

He also expressed support for the committee disclosing all the depositions and documents from its investigation to go beyond such displays as were presented during the “choreographed” hearing.