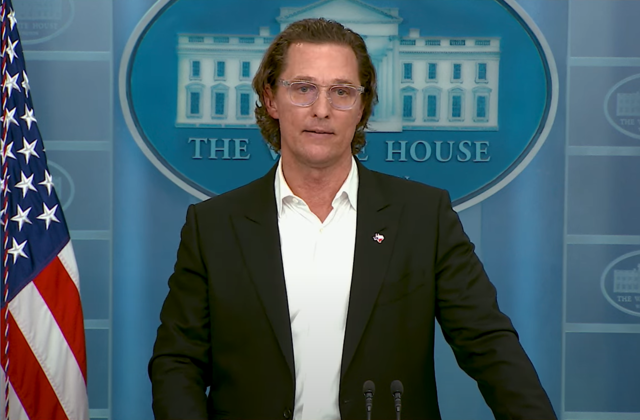 “[T]he right of the people to keep and bear Arms, shall not be infringed.”   United States Constitution, 2nd Amendment

After the recent horrific murders of 19 children and 2 teachers in Uvalde Texas the actor Matthew McConaughey, who is originally from Uvalde, gave a widely praised impassioned speech urging that the horror of this tragedy might motivate well-meaning people on both sides to come together to enact serious allegedly “common sense” gun control to prevent such tragedies in the future, specifically, more extensive background checks, “red-flag” laws to restrict the rights of dangerous people to own weapons, and increasing the age limits on the purchase of some weapons like the AR-15 from 18 to 21.

This is understandable given the contrast between McConaughey’s authenticity and the transparent inauthenticity of politicians and media demagogues who immediately jump to use the bodies of the Uvalde victims to enact their anti-gun political wish list.  By contrast, no one doubts that McConaughey actually wants to solve the problem as opposed to using it for a political agenda.  Despite this, McConaughey’s suggestions, as tempting as they are and as much as one wants to do something to stop the violence, would do little or nothing to solve the US gun problem.

First, how are these background checks and “red flag” laws supposed to work?  The idea is that if one does a background check on a troublesome person, usually a troubled young male, and finds that they have made violent threats, a “red flag” law will enable one, at least temporarily, to prevent them from obtaining guns.

The first problem with “red flag” laws is that it is not clear that they are constitutional.   In the United States, one has the right to be presumed innocent until proven guilty.  But “red flag” laws will target people who have not done anything wrong yet.  Presumably one could only deny one the right to own a weapon if a psychologist or legal official has concluded that they might cause harm someday.  However, one should not, in the United States, be able to deny someone their constitutional rights because someone has concluded that they might cause harm someday. Perhaps this would be acceptable in the old Soviet Union but not the current United States.

One might reply that these are very special cases because “red flag” laws would only apply to people who made actual threats, not to someone who was just creepy or showed an unhealthy fascination with violence.  The problem with this is that many people make violent threats and never carry them out. One cannot punish a hundred (or a thousand or ten thousand) people just because one of them might someday go on to commit gun violence.

Further, it might seem simple, when one is sitting in Sociology 101 or on a CNN panel of “experts,” to claim that a psychologist can easily distinguish between those who might someday be genuinely dangerous and those who are just weird, and, therefore, between those who should be “red-flagged” and who should not.  In fact, however, in two of the three recent mass school shootings, Sandy Hook in 2012 and Stoneman Douglas in 2019, the shooters were examined by psychologists well in advance of the shootings, and no action was taken. The Stoneman Douglas shooter, Nikolas Cruz, had an extensive history of self-harm and threatening people.  Although State investigators reported that he had depression, autism, and attention deficit hyperactivity disorder (ADHD), they concluded that he was “at low risk of harming himself or others.”   A “red flag” law would have failed in this case

The Sandy Hook shooter, Adam Lanza, who shot and killed 26 people in 2012, had an extensive history of mental problems starting at age 3. He was, over the years, diagnosed with communication, sensory, and socialization difficulties and anxiety, and obsessive-compulsive disorder (OCD). At 14, the Yale University’s Child Study Center recommended extensive special education support, ongoing expert consultation, and rigorous therapeutic support but this went largely unheeded.  Of the numerous providers that examined Lanza over his life “only one, the Yale Center, seemed to appreciate the gravity of [Lanza’s] presentation” but even they concluded that “While we describe the predisposing factors and compounding stresses in [Lanza’s] life, we do not conclude that they add up to an inevitable arc leading to mass murder.”

Similarly, McConaughey’s suggestion that one might change the age at which one can buy an “assault rifle” like the AR-15 from 18 to 21 is, unfortunately, a knee-jerk response to the fact that two mass shooters in a row have used an AR-15.  The point can be illustrated by reference to Judith Miller’s false remark on Foxnews that even pro-gun Wyoming does not allow people to buy guns until one is 21.  In fact, Wyoming allows one to buy rifles at the age of 18 but does not allow one to buy handguns until 21.

The reasons for this could not be clearer. Although the shootings involving the AR-15 have been dramatic, only about 3% of homicides involve a rifle (of which so-called “assault rifles” are a proper subset), while most homicides, about 59%, involve handguns.  This is because a handgun is far easier to conceal, for example, in a backpack than a rifle or “assault weapon”.  Ban the AR-15 and prospective mass shooters will simply move to a different more easily concealed kind of weapon.

Finally, the most important, reason why McConaughey’s proposals are unworkable is that ultimately any such provisions would have to be enforced by the government in the broad sense of that word, a government so incompetent that it cannot figure out how to get baby formula on the shelves.  Only about 20% of the population now trusts the government to do what is right “just about always”.   Unaccountable “liberal” elites (actually leftist radicals) have contempt for the “basket of deplorables”, that is, the ordinary hard-working American patriots who refuse to submit to their perverse “values”.  Leading politicians, drunk with power, become obscenely rich as they do tremendous damage to the nation and its laws.

As a consequence, most Americans believe the United States, once seen as the greatest country in the world, has “gone off the rails” and that their children’s lives will be worse than theirs.  Less than half of US likely voters view the FBI favorably, down from 60% as recently as May 2020, and only about 15% view it “very favorably.”  The reasons why are obvious.  Many Americans see a two-tier justice system in which the unaccountable elites walk free while their conservative political opponents, patriots, are treated harshly.  More than half of Americans  (53%) now fear their own government which is more and more beginning to resemble Mao’s communist China.

As Lord Acton said, “All power corrupts and absolute power corrupts absolutely”.  The 2nd Amendment was put into the Constitution as the last line of defense against tyranny.

“Disarm the people – that is the best and most effective way to enslave them.”   Founding Father and 4th President of the United States James Madison