Jan. 6th Committee Ratings Were Not What Democrats Were Hoping For 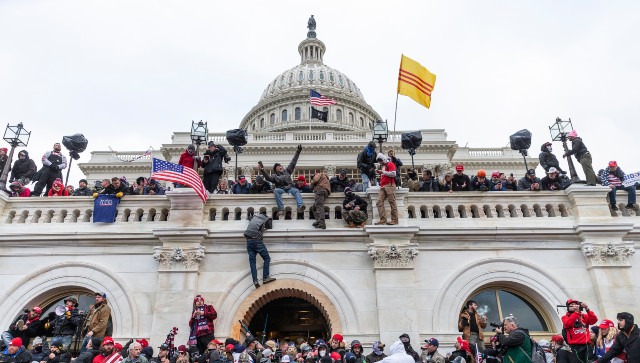 There’s an age-old philosophical thought experiment that asks, “If a tree falls in a forest and no one is there to hear it, does it still make a sound?” But after Thursday’s stunt by the Democratic Party known as the ‘Capitol Assault Hearings,’ we have a new, modified version that asks this: “If a failing political party puts on a primetime TV extravaganza but no one tunes in to watch it, will it make any difference in the November elections?” Food for thought.

Personally, it seems to me that the Democratic Party has underestimated the general public, believing that they are stupid enough not to see through the shenanigans they are trying to pull with this clear example of political theater. We can all see through the smoke screen. The left is attempting to silence their political opposition by making them all appear to be domestic terrorists.

Doesn’t take an Enstein-level IQ to understand the tactics being employed.

On Thursday night, only hours before the Dow Jones Industrial Average was sent plummeting by 880 points due to Friday’s devastating report showing that inflation remains at a 40-year high, the leadership of the Democratic Party staged what they hoped would save their electoral chances in November. Not only were the hearings being held in primetime, but they were also being broadcast live by their chums in the media, which is to say every major news network except for Fox News.

This is just more proof that the mainstream media have long abandoned the mission of keeping the American public informed of the facts involving issues of the day, choosing instead to be propaganda machines working on their knees to fulfill the every desire of their progressive overlords.

This maneuver would change the tide of the election, the Democrats thought. Americans would finally see how terrible Donald Trump and all of the people involved in the GOP are, they hoped. For some reason, Democrats were banking on voters turning on their favorite left-wing news channel to witness the farcical proceedings while simultaneously forgetting about the calamitous governance of Joe Biden. It didn’t work, and the viewership ratings for Thursday night show just how mistaken the Democrats were.

According to an analysis by Newsbusters:

“Based on the most recent ratings data, January 6 hearing coverage on broadcast networks (ABC, CBS, and NBC) drew significantly smaller audiences than those networks’ own evening newscasts generally do on a standard weekday. Evening newscast audiences on any given night last week were 1.6 times larger than the total number of broadcast viewers who tuned into the hearings on Thursday.

Contrast the above ratings with those for the same networks’ evening newscasts for the week of June 1, which averaged 5.92 million viewers per evening.”

As bad as those numbers look, in reality, they are even worse. Newsbusters’ examination compares the viewership of the Democrats’ dog-and-pony show to “evening newscast audiences.” But the networks’ nightly newscasts generally occur between 6:00 PM and 8:00 PM, depending on the time zone. That’s not primetime, and, by definition, primetime typically has even higher ratings.

No matter how we slice the data, and regardless of how we dissect the corpse of the Democrats’ sideshow, Thursday’s ratings results for the Congressional hearings were pathetic.

Is this the Democratic Party’s last gasp? Will their sinking ship finally submerge on its way to the ocean floor? Probably not, because Democrats are utterly desperate. There will be more hearings this week, though none will be in primetime, and after Thursday’s ratings fiasco, they may never get that privilege again. Which is a total relief for those who would like to actually enjoy a stress free evening without being subjected to the ridiculous and very desperate attempts by the Democratic Party to invigorate their base.

But Democrats must try and distract Americans with January 6th, or gun control, or an imaginary crisis of white supremacy because that’s all they’ve got. They can’t run on foreign policy because voters will be reminded of the botchery of Afghanistan and Ukraine. They can’t run on national security because they’ve opened up our southern border for troublemakers to pour through. And they can’t run on the most important issue – the economy – because it’s in shambles and Biden and Democrats are to blame. So distractions like January 6th are all they have left.