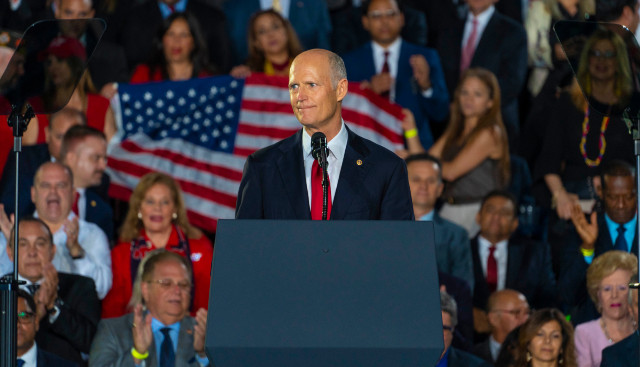 A Republican senator has released a new TV ad that launches a scathing attack against President Joe Biden, making the claim that he is unfit for office and demands that he immediately resign from office.

“Joe Biden has destroyed America’s economy,” Scott states in the ad. “It’s time to be honest with the American people. Joe Biden is unfit for office and should resign.”

The funding for the ad came through Scott’s re-election committee known as “Rick Scott for Florida.”

“Joe Biden is failing Americans. He created a crisis that is devastating families livelihoods and is now turning his back on Americans when they need his leadership the most,” Scott goes on to say in the statement.

“Biden is totally disconnected from the pain his policies have caused, and he has NO PLAN to curb his self-made inflation disaster. Sadly, I think it’s now clear that ‘Rich-Kid-Biden’ is just too hopelessly out of touch and heartless to ever care enough to fix it,” he said.

Scott continued to roast the president on both sides saying he was out of touch with the daily lives of most citizens of the United States, pointing out Biden’s 50 years as an elected officials as proof.

“Think about it: Joe Biden has never struggled financially, spent half a century living on the taxpayers’ dime and has no interest in understanding what it’s like for Americans who are hurting right now. The problem isn’t that he grew up with money, it’s that he doesn’t care about people who didn’t,” the senator said in the written statement.

Scott then tore Biden a new one for his failure to address the soaring inflation and sky high gas prices that have happened during his time as president.

“Inflation was 1.4% the day he took office. Gas was $2.39 per gallon. Now we are seeing inflation at a 40-year record high and gas is so expensive families, especially our poorest families like mine growing up, are having to make choices between fuel in the tank or food on the table,” he went on to say in his piece.

“Joe Biden and his failed administration have been wrong on inflation every step of the way and Americans are sick and tired of paying the price for his incompetence,” the senator then concluded.

Scott is right on many of the points he made against the president. We’ve seen nothing good come of this administration over the course of the last year and a half. Biden might be the worst person to occupy the office of president in this nation’s history.

He needs to be held accountable for his lack of action on critical issues, and given the fact he’s not well cognitively speaking, it’s time for him to go.