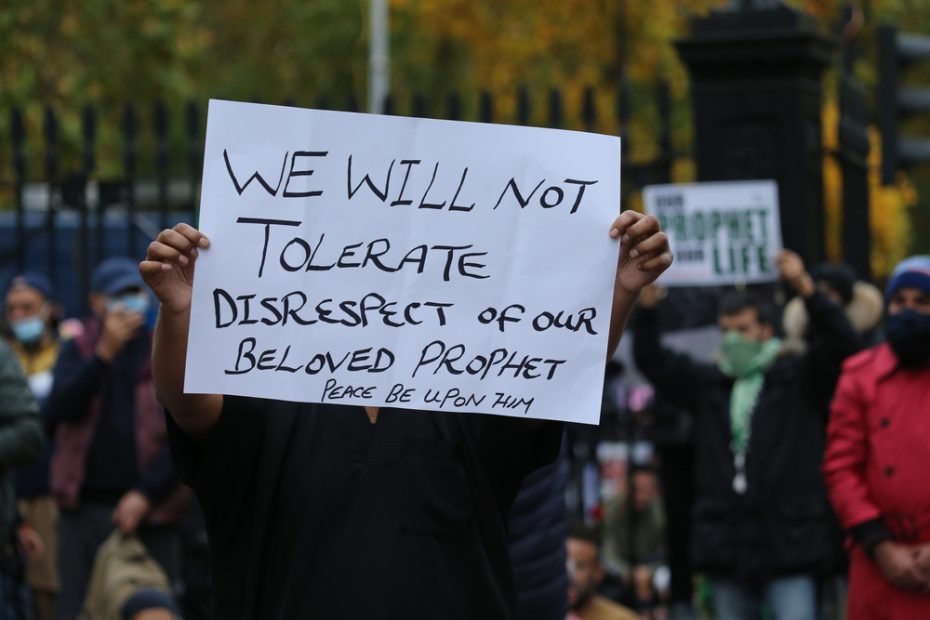 Proving yet again that diversity is not our strength, Muslim groups successfully petitioned in getting a new movie removed from theatres across the pond, claiming the flick is blasphemous to Islam because it depicts the prophet, Mohammad, using a digital representation of his face.

Cineworld, a British cinema chain, will cancel all screenings of “The Lady of Heaven“, capitulating to Muslim groups who have amassed protests over not only prophet Mohammad’s face, but also the historical accuracy of the events during the life of his daughter Fatimah. While Sunni Muslims comprise the majority of the protestors, Fatimah’s life is a key point of contention between Sunnis and Shiites.

In the film Mohammad’s face is an amalgamation of many different faces cobbled together using CGI, something which Muslims from both major sects claim is blasphemous.

According to Breitbart, the complaints started via a petition demanding that the film be removed from all British movie theatres. This was followed by protests held outside theatres whereby protestors held signs and chanted slogans such as “Allah hu Akbar,” or “God is great.” Cinemaworld responded:

“Due to the recent incidents regarding screenings of ‘The Lady of Heaven,’ we have made the decision to cancel upcoming screenings of the film nationwide to ensure the safety of our staff and customers.”

People took to social media to post footage of the protests, with one protester at the Cinemaworld theatre in Bradford yelling, “We have a right not to be insulted”.

But that wasn’t all the protest mob said.

Another protestor reminded Muslims of their responsibility to protect their faith, warning that they would resort to violence and self-sacrifice if necessary:

The mob also called Shiites “kafir”, which refers to the sect as non-believers.

What’s perplexing is that screenplay was written not by a non-Muslim but by a Muslim Shia cleric, Yasser Al-Habib, who wanted to tell the story of the life of Fatima from her perspective.  He called out Sunni protestors to engage with him directly rather than protest outside theatres and create “a state of panic.”

“We’re the ones who made the movie, come and protest here, not outside cinemas creating a state of panic” the screenwriter of The Lady of Heaven movie sheikh Yasser al Habib #TheLadyOfHeaven pic.twitter.com/6BL0tWvFjb

This internecine hatred has been noted by Muslims and non-Muslims alike.

Wasiq Wasiq, journalist and Associate Fellow at the Henry Jackson Society, a conservative think-tank, said that the use of the phrase “kafir” against Shia Muslims represented a form of Islamophobia, writing that it “is more than just sectarianism, it is anti-Muslim sectarianism and therefore anti-Muslim hatred.”

Baroness Claire Fox, a well-known free speech advocate, decried the movie theatre’s decision to pull the film, and warned that caving to the mob is a slippery slope and chips away at free expression:

“Same ‘I Find that Offensive’ cancel culture arguments now being used far beyond campus activism. Disastrous for the arts, dangerous for free speech, a lesson to those who argue identity politics are no threat to democracy,” Fox wrote.

Others called out cultural elites for bowing to identity politics and upholding victimhood above all else.

Inaya Folarin Iman, a host and political commentator on GB News, pointed out the “cowardice” of the self-flagellating, self-imposed elites, saying that this continued obsequience to values antithetical to their own contributes to the downfall of British culture and tradition:

“This is a deeply troubling moment for freedom of speech and tolerance in Britain. If our cultural and political leaders cannot be bothered to stand up for these fundamental values, then it is all too likely they will wither away. We can’t let this happen,” she urged.