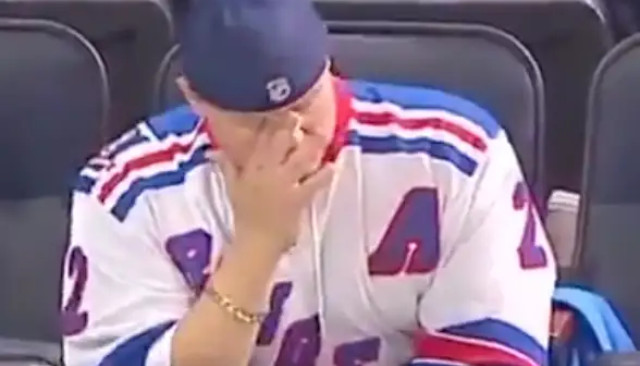 Being a fan of a sports team comes with a whole lot of ups and downs. Sometimes even in the same game. One minute, your team is up by six in the first period or quarter of play, the next thing you know, there’s ten seconds left in the game and the opposing team just scored to earn a victory.

According to a piece published by the fine folks at Barstool Sports, a new video that’s gone viral showcases exactly what this roller coaster journey looks like. A man, sitting all by himself at game 5, watching the New York Rangers runs the gamut of possible emotions you can have during an intense display of competition.

Here are more details from the Barstool Sports piece:

I can’t sit here and breakdown the mistakes made by the Rangers to lose Game 5. I’m here because this is a guy that needs to be talked about. I’m here because anyone who has cared about a team has been in this situation before. You sit there, it doesn’t even have to be at a stadium, after your team loses a pivotal game or even their season ends and this is all you can do. That man is replaying the game. He’s not worried about his ‘friends’ or ‘significant other’. Oh no, he’s figuring out how this wasn’t a goal:

But back to the big fella sitting at MSG. The eye wipe at the end, that’s the sign. That’s the sign of a man who is living and dying with a team. 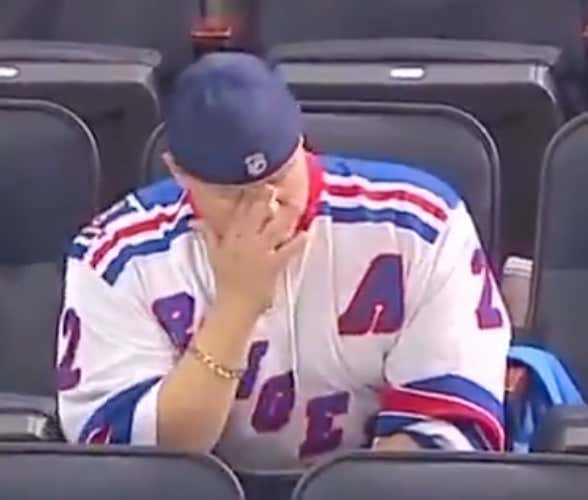 All he knows is pain. All he wants is Brian Leetch and Mark Messier to show up. This guy should not be made fun of. Oh no, he deserves praise. This is fandom at its finest. Getting your heart ripped out, refusing to leave and knowing that this guy stayed up all night drinking, rewatching a game and replaying it in his head. He would have scored that goal. He would have stopped that game-winning goal by Palat or blocked the shot leading to that by Sergachev.

We’ve all been that guy a time or two, haven’t we?

While the world seems to be imploding every single day, sports has become critical to helping us escape from the madness. And given how crazy things are, it’s nice to enjoy a break from the insanity and laugh a little.

And this guy’s misery has managed to bring a whole lot of joy. I’m sure he’s thrilled with his new found fame and is living the dream out there somewhere.