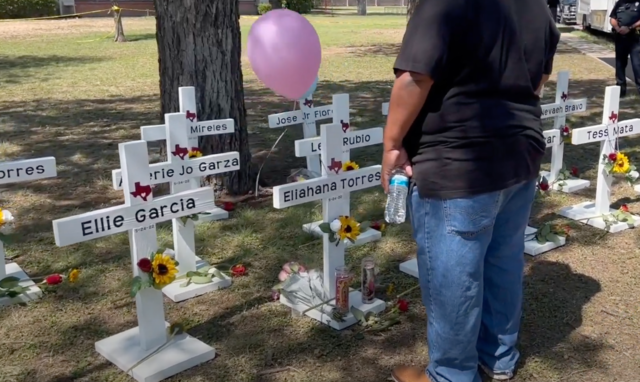 It has been two weeks since an 18-year old boy, after shooting his grandmother in the face, fled to a Uvalde, Texas elementary school where he proceeded to murder 19 young school children, 8 to11 years of age, and 2 elementary school teachers, before being killed by a responding Border Patrol Agent.

Much as has been and will be written in the days ahead of this senseless shooting.  Politicians and pundits will continue to speculate as to what caused an 18-year-old boy to go on such a deadly rampage.  In the aftermath of this and previous mass shootings, just like Pavlov’s dog, the secular-progressive Marxists are salivating for more gun control in furtherance of their political agenda.  They are of the belief that an inanimate object is responsible for the carnage and they apparently refuse to accept that deranged demon-possessed psychopaths are solely responsible for these mass casualties.  And, why wouldn’t they?  They almost always seem to want to excuse the wrong-doer for his behavior.  If a person is to be deemed responsible for the deaths of young school-age children, then other persons, albeit under different circumstances, could be held responsible for the deaths of pre-born infants, and that never plays well with the pro-choice crowd.

Others have called for more psychological profiling, hardening of school security systems, hiring of off-duty police, retired police, and military personnel to provide added armed security, and even the arming of qualified teachers.  Taken by themselves, these would provide additional layers of security.

Some pundits have blamed the recent shutdown of the schools due to the Covid pandemic and the loneliness and psychological problems that has engendered in some young people.  Others have blamed the prevalent use of drugs and the use of violent video games.  One pundit came closest to identifying the root cause for the recent mass shootings our nation has witnessed when he noted that in almost every case, the shooter had “no moral compass” and came from a broken home where there was no father present.  While all of the above are contributing factors, nobody seems willing to talk about the fundamental core reason for these horrific crimes.

Our nation was founded on Judeo-Christian principles.  In our Declaration of Independence, signed on July 4th, 1776, are written these words, “We hold these truths to be self-evident; that all men are created equal, that they are endowed by their Creator with certain unalienable rights, that among these are life, liberty, and the pursuit of happiness.”  President John Adams famously stated, “Our Constitution was made only for a moral and religious people.  It is wholly inadequate to the government of any other.”  He also stated, “Power always thinks it is doing God’s service when it is violating all His laws.”

As early as the 17th century, the need for public education was recognized by the Puritan’s, living on America’s shores, who determined that education was essential for both the teaching of basic academic skills and core religious values – values that many no longer deem as essential for modern society.

From 1861 until 1865, the United States was engaged in a great civil war.  On November 19, 1863, speaking at the dedication of a national cemetery at Gettysburg, PA., President Abraham Lincoln said, “Four score and seven years ago, our fathers brought forth on this continent a new nation, conceived in Liberty and dedicated to the proposition that all men are created equal.  Now we are engaged in a great civil war, testing whether that nation or any nation so conceived and so dedicated can long endure.”  The underlying issue then was a moral issue, whether a nation could remain half-slave and half-free.

A century later, the US Supreme Court ruled that prayer in the public schools at the beginning of the school day is a violation of the establishment clause of the 1st amendment (Engle v. Vitale, 1962).  And, so began our second great ongoing civil war – a cultural war between those who embrace traditional Judeo-Christian moral values and those who want to change America into a secular-progressive Marxist society.  Subsequent Supreme Court rulings have expanded this prohibition to preclude “state-sponsored devotional Bible reading in public schools” (Abington School District v. Schempp, 1963);  to preclude “a period of meditation or silent prayer” (Wallace v. Jaffree, 1985);  to preclude opening invocations and closing benedictions at school graduations (Lee v. Weisman, 1992);  and, to preclude student-led prayer at school athletic events (Santa Fe Independent School District v. Doe, 1995).  In each of these cases, and others, our judiciary has, in effect, escorted God from the classroom to the exits and would not allow Him to have input in the public educational and societal affairs of mankind.

God’s laws, embodied in the 10 Commandments from which nearly all laws are derived, have further been eroded by the courts.  In January 1973, the Supreme Court in Roe v. Wade ruled that abortion, the killing of an unborn child, was a constitutional right.  The right to life of the unborn was relegated to the choice of the mother and the sanctity of life was grossly assaulted.  In June 2015, the Supreme Court overturned the traditional definition of marriage as being between one man and one woman (Obergefell v. Hodges, 2015), negating God’s plan for marriage.  And, today, we are watching as the actual biological distinctions of male and female are being re-defined and transgenderism is put forth as an option for our youth.  Is it any wonder that many 18-year-old kids are confused and messed up?

In 2009, then-President Barack Obama publicly (and proudly?) stated that the United States is “no longer a Christian nation.”  Not that we, as a nation, have always lived up to the ideals set before us by the founding fathers.  But, for the first 186 years of our existence, we aspired to those ideals set forth in our founding documents…we even fought a great civil war to guarantee those rights for all men.  For too many in our society, government has become their god and secular-progressive Marxism has become their theological doctrine.

Man can be likened to a three-legged stool, the legs being the physical, the mental, and the spiritual components of man.  Remove one of those three components and man becomes unbalanced.  We take great care in the development of man’s physical being through proper nutrition and exercise, and of his mental being through education and exploration.  But we have, for too long, ignored the development of his spiritual being.

The Greek Philosopher, Aristotle, first postulated in the 3rd century B.C. that nature abhors a vacuum and that there is no perfect vacuum.  What is true in the scientific world, is also true in the spiritual world.  Demonic forces do exist in our world and when we remove God from the soul of a nation or the heart of an 18-year-old boy, the resulting void will be filled with evil demonic thoughts and desires.  Too many young people no longer know good from evil or right from wrong, and the end result is often manifested, not only in mass school shootings but in the slaughter carried out nightly on the streets of our nation’s largest cities – especially those with the most stringent gun control measures – and in the abortion clinics across our country.

Nearly 2,600 years ago, God spoke to King Solomon in a dream at night and, in anticipation of bad things to be visited upon his nation, said, “If my people, who are called by my name, will humble themselves and pray and seek my face and turn from their wicked way, then I will hear from heaven and forgive their sins and heal their land” (2 Chronicles 7:14).  Not until this nation experiences a spiritual renewal where God’s commandments are again taught in our schools and the honor of His presence is again requested in our society, will the soul of our nation be healed.

Quentin Smith is a military veteran and retired FBI Special Agent who served in the Bureau for nearly 29 years and now lives in Idaho.