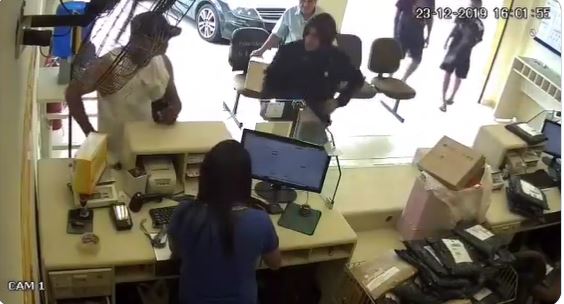 What happens when a good guy with a gun gets involved in stopping a crime?

Well, so long as that good guy isn’t the coward cops of Uvalde, “men” who sat around in body armor while heavily armed rather than rushing in to save the kids, there’s a good chance that the good guy can stop the crime.

That’s particularly true when the bad guys are the typical untrained thugs, wielding guns without being trained in their use, and the good guy is the sort of well-armed, well-trained, law-abiding citizen that typically carries a firearm for personal protection.

Good guy with a gun saves the day!pic.twitter.com/QPy0zX2xfK

And the video above, shocking as it might be, isn’t an aberration: the data shows that guns are often used to stop crimes. FEE, reporting on that, for instance, noted that:

Similarly, an Obama-era investigation into firearms and firearm-related violence, a study conducted in the wake of the horrific Sandy Hook massacre, estimated that 3 million crimes annually could be stopped by private citizens with firearms, or some 8,200 every day.

Those estimates could, however, be overestimates. Just the Facts, reporting on guns and self-defense, notes that:

In 1995, the Journal of Criminal Law and Criminology published the results of a 1993 nationwide survey of 4,977 households. It found that over the previous five years, at least 0.5% of households had members who had used a gun for defense during a situation in which they thought someone “almost certainly would have been killed” if they “had not used a gun for protection.” This amounts to 162,000 such incidents per year and excludes all “military service, police work, or work as a security guard.”

However, that only covers situations in which the victim thought he or she “almost certainly would have been killed” had a gun not been used for protection, so perhaps it takes a more limited number of circumstances into account.

Some other interesting statistics from Just the Facts on good guys with guns include:

Based on survey data from a 2000 study published in the Journal of Quantitative Criminology,[23] U.S. civilians use guns to defend themselves and others from crime at least 989,883 times per year

Based on data from a 1993 survey published in the Journal of Criminal Law and Criminology, at least 3.5% of households had members who had used a gun “for self-protection or for the protection of property at home, work, or elsewhere” over the previous five years. This amounts to 1,029,615 such incidents per year and excludes all “military service, police work, or work as a security guard.”

A 1994 survey conducted by the U.S. Centers for Disease Control and Prevention found that Americans use guns to frighten away intruders who are breaking into their homes about 498,000 times per year

Regardless of whether the estimate of 100,000 or so at the low end or three million or so at the high end is correct, it’s still a substantial number of crimes that are stopped by good guys with guns using those guns to defend themselves or others. Remember that the next time you hear politicians calling for gun control.