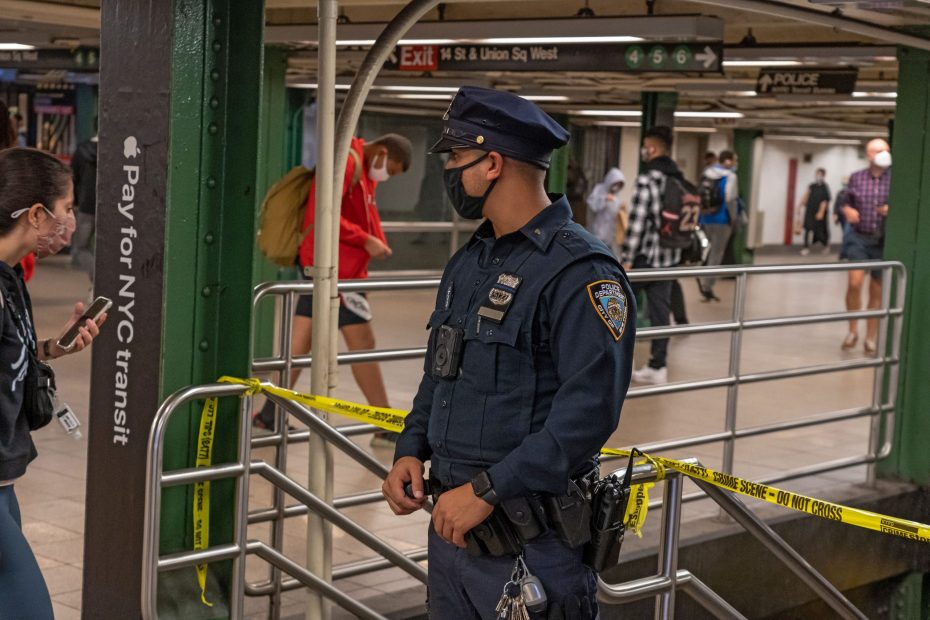 NYC cops have released the horrifying footage of a man flinging a woman onto subway tracks in the Bronx in what was reportedly a random attack.

The video taken from a security camera on Sunday at 4:45 pm at Jackson Avenue station in the Bronx showed a man wearing a white tank top, red backpack, a backward baseball hat, and what appears to be army-camo shorts, approaching the 52-year-old female victim before grabbing her from behind and hurling her onto the tracks.

Fortunately, no train was approaching the platform at the time of the incident and shocked on-lookers were able to reach the woman to pull her onto the safety of the platform.

According to witnesses, the attack was completely unprovoked and the suspect calmly walked away.

The woman was taken to Lincoln Hospital where she received treatment for a broken collar bone and numerous cuts and bruises caused by the heavy fall onto the tracks.

New York’s subway has become a hotspot for violent assaults and random attacks. Just last Wednesday, an argument over a man playing loud music in a Bronx subway station resulted in the victim having his wrist slashed by a blade, severing an artery.

A mere matter of days before that, a 43-year-old male victim was stabbed multiple times in the head and body after a “dispute” in the subway at Atlantic Avenue. The victim survived, but the suspect is still at large.

Last month, Andrew Abdullah executed stranger Daniel Enriquez by calmly shooting him in the head at point-blank range in front of other passengers. Reports say the attack was unprovoked and Enriquez had been on his way to a lunch meeting before he was gunned down.

Abdullah escaped capture for 2 days before turning himself in.

Concerned New Yorkers have blasted the city’s Democrat mayor, Eric Adams, an ex-cop who had vowed to improve safety on the streets of the Big Apple.

Despite his promises, overall crime remains up by almost 40 percent in 2022 compared to this time last year. There’s been a 40 percent rise in robberies across the region, a 19 percent increase in felony assaults, and a 14.8 increase in rapes according to NYPD figures.

It’s obvious why @ManhattanInst’s poll found that crime & safety will be a leading issue in the 2021 mayoral election. No New Yorker can look at these crime stats and say our current leadership is serving us well. We cannot afford another @BilldeBlasio to run NYC. pic.twitter.com/J1b8gLYJlg

Murders are slightly down from last year, but only by 9.9 percent.

Speaking in a news conference with the NYPD, Adams blamed the justice system for releasing suspected shooters, which he said has led to “bad guys not taking them seriously”.

“The courts have to prosecute. Judges have to make sure they stay in,” said Adams.

“Everyone has to do their part. If not, they go out and come back.”

New York’s controversial bail reform legislation, which was backed by the Dems and went into effect in 2020 has meant that many dangerous career criminals and thugs are released back onto the streets after committing crimes. Many of whom go on to commit further, violent offenses.