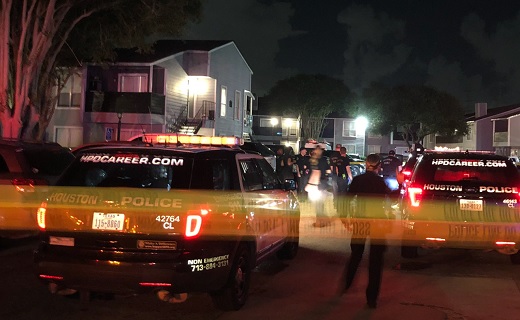 Police said that a Texas woman shot and killed her suspected stalker after he kicked in her front door, in Harris County. The shooting took place at the Gateway at Ellington apartment complex, and the Houston Police responded to the apartments and found a male with a gunshot wound to the chest. Some reports suggest the man may have been her ex-boyfriend.

There was nothing much to do at the scene, but to pronounce the suspected male dead.

Police said, after the man kicked the front door of the unidentified woman, she shot the suspected stalker. She had recently moved to get away from the man, but he obviously found out where she lived as she told the police, a report said.

They said that the police found damage to the woman’s door frame. And during the incident, other people were inside the residence.

A photo was posted on Twitter by the Houston Police Department, where the scene where the shooting happened could be seen, saying officers from its Clear Lake division responded to the scene.

At the moment, the investigation into the matter is ongoing.

For a request to comment on any updates in the case, the Houston Police did not immediately respond.

Fox News added to the reports: ”

Police said they found damage to the woman’s door frame. Other people were inside the residence during the incident.

The Houston Police Department posted a photo of the scene to Twitter on Monday, saying officers from its Clear Lake division responded to the scene. ”

The investigation is still going on, but Houston Police did not provide comments to Fox News upon request.