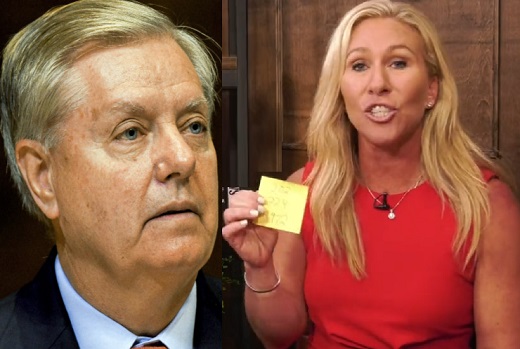 WATCH Marjorie Taylor Greene give out Graham’s number on video:

.@RepMTG goes off on @LindseyGrahamSC, gives out his phone number, tells him to "start acting like a Republican" and stop pushing Joe Biden's Red Flag Gun Confiscation. pic.twitter.com/RNN05x7AsZ

When it comes to Joe Biden’s proposals for tighter gun control after the recent mass shootings, at least one Republican stood against it in light of the United States Constitution and in hopes to protect American’s freedoms.

Republican Gov. Henry McMaster straight up said that some of President Biden’s proposals could infringe on Second Amendment rights in particular.

According to WCSC, some of the measures Biden proposed in an address last week “were banning assault rifles or raising the age at which people can purchase them, along with expanding background checks and red flag laws.”

McMaster countered that proposal by saying to reporters in North Charleston: “Everyone in the country has a right, unless they’ve been adjudicated otherwise, to have a firearm or have numerous firearms, and I think some of things the president is suggesting are intruding or could intrude into that Second Amendment area.”

Biden’s full remarks were heavily criticized because he claimed the Second Amendment is not absolute. His full remarks stated the followings:

Q Good morning, Mr. President. Do you feel more motivated to get action on guns now?

THE PRESIDENT: Well, I’ve been pretty motivated all along. You know, the folks — the folks who were victimized there, and their families, they spent 3 hours and 40 minutes with me. And they waited all that time, and some came two hours early.

And — but the pain is palpable. And I think a lot of it is unnecessary.

So I’m going to continue to push, and we’ll see how this works.

Q Are you going to send long-range rocket systems to Ukraine?

THE PRESIDENT: We’re not going to send to Ukraine rocket systems that can strike into Russia.

Q Sir, do you think there is anything different in how Republicans will approach the gun reform question now, given the circumstances?

THE PRESIDENT: Since I haven’t spoken to them, I don’t know. But my guess is, if they have — if they — yes, I think they’re going to have to take a hard look.

Q Is there one element — is it aid, is it red flag, is it some component that you think could be most successful now?

THE PRESIDENT: Well, that’s hard to say because I have not been negotiating with any of the Republicans yet. And I deliberately did not engage in a debate about that with any Republican in — when we were down consoling the families in Texas. So I don’t — I don’t know what is the most — how far it goes.

I know that it makes no sense to be able to purchase something that can fire up to 300 rounds. I know it makes — and I know what happened when we had rational action before, back in — when the crime bill was — the law that got passed. It did significantly cut down mass murders.

And so there’s only one reason for something that can fire, you know, 100 shots.

I mean — and I’ll just conclude with this: Look, when I first started doing hearings on the issue of what rational gun laws should be, it was during a period when I was a senator and the death rate was going up. Not that many more people were being shot, but the death rate was up. And when I think of — I’m not sure, I think it was (inaudible) hospital in New York — whatever the largest trauma hospital is.

And I sat with a trauma doctor, and I asked him — I said, “What’s the difference? Why are so many people…” — and not that many more people were being shot. This is now 20 years ago, or 25 years. I said, “Why are they dying?” And they showed me x-rays. He said, “A .22-caliber bullet will lodge in the lung, and we can probably get it out, may be able to get it, and save the life. A 9mm bullet blows the lung out of the body.”

And those who — not many are saying it anymore, but there was a while there where people were saying that, you know, the Tree of Liberty is watered with the blood of patriots, and what we have to do is you have to be able to take on the government when they’re wrong. Well, to do that, you need an F-15, you know? Or you need an Abrams tank.

I mean — so, it’s just — as I say, I think thing — I think things have gotten so bad that everybody is getting more rational about it. At least that’s my hope and prayer.

I’ve got Gold Star moms in there, so I got to go in.

Q Sir, I know you want Congress to act, but do you believe that as President you have a particular responsibility now?

THE PRESIDENT: Oh, I know I have it, but I — but there’s a Constitution. I can’t dictate this stuff. I can do the things that I’ve done. And any executive action I can take, I’ll continue to take. But I can’t outlaw a weapon. I can’t, you know, change the background checks. I can’t do that.

And, you know, my whole career, I’ve been doing it.

THE PRESIDENT: Persuasion, yeah. But, you know, there’s been a few things happening. I know you’ve noticed it. You’ve had to travel with me. (Laughs.)

Q McConnell has ordered a directive to Senator Cornyn to search for a compromise. Do you really think there’s something there? Or are they just making noise?

I’ve got to go in. I’ve got the Gold Star parents. Thank you.