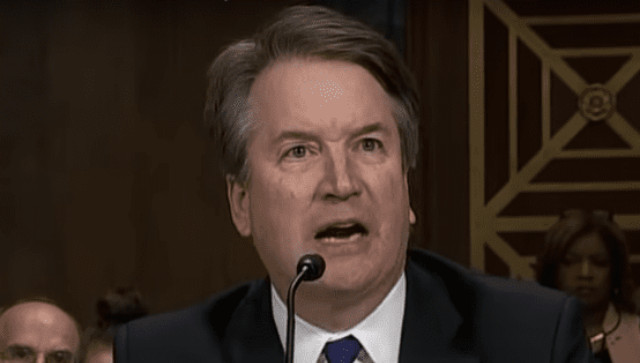 Police arrested a California man near the home of Supreme Court Justice Brett Kavanaugh, after he allegedly told law enforcement officers that he was planning to murder the justice in cold blood.

This is the kind of opposition folks on the right are facing, especially people like Justice Kavanaugh, after the leak of the Supreme Court opinion draft that mentioned overturning Roe v. Wade.

How desperate are those on the left to protect the sacrificial murder of unborn children? Apparently desperate enough to kill.

According to Supreme Court Public Information Officer Patricial McCabe, who spoke with the Daily Wire on Wednesday morning, ““at approximately 1:50 a.m. today, a man was arrested near Justice Kavanaugh’s residence.”

“The man was armed and made threats against Justice Kavanaugh,” she went on to reveal. “He was transported to Montgomery County Police 2nd District.”

Here are more details from the Daily Wire:

The case has now been handed over to the FBI, the spokeswoman said, and the Montgomery Police Department is not able to comment on whether or not he had a weapon.

This is why leaks are dangerous.

This is why doxxing justices is a bad idea.

This is why justices’ homes should be off limits.https://t.co/UTb2i8zRAL

Anonymous sources familiar with the investigation told The Washington Post that the man is in his mid-20s and was carrying at least one weapon as well as burglary tools.

Apparently, someone tipped off cops that the might pose a potential threat to Kavanaugh, sources went on to tell the publication. The man was then stopped on the street close to Kavanaugh’s Montgomery County residence.

The report said that the man did not enter Kavanaugh’s property.

“The Washington Post reported that initial evidence suggests the man was angry over recent mass shootings and reacted to a leaked draft opinion indicating that the Supreme Court would overturn Roe v. Wade,” the Daily Wire reported.

“This is why leaks are dangerous. This is why doxxing justices is a bad idea. This is why justices’ homes should be off limits,” Judicial Crisis Network’s Carrie Severino stated in a post on Twitter.

“This is why the Court must release the Dobbs opinion as soon as possible,” she continued. “This is not, to quote the Chief Justice, ‘business as usual’ at the Court. The threat to the justices is not theoretical. Until the opinion is finally released, the justices are in grave danger.”

Severino then called on President Joe Biden to “stop appeasing the radicals” that belong to his political party and start emphasizing that “protests belong in the public square, not at justices’ private homes.”

“Will you finally condemn them?” she asked pointedly.

.@POTUS: It’s time to stop appeasing the radicals in your party.

Protests belong in the public square, not at justices’ private homes.

Will you finally condemn them?

“A May 13 Department of Homeland Security (DHS) memo obtained by Axios revealed that government officials are investigating threats to the justices, the clerks, to places of worship, and to abortion clinics,” the Daily Wire said.

According to the memo, the threats “are likely to persist and may increase leading up to and following the issuing of the Court’s official ruling.”

Again, this is how far the radical left is willing to go in order to protect their ability to murder children in the one place they should be the safest: their mother’s womb.

It’s sickening that so many are willing to throw away their children’s lives for the sake of avoiding responsibility and to ensure they can continue to indulge their fleshly desires without consequence.