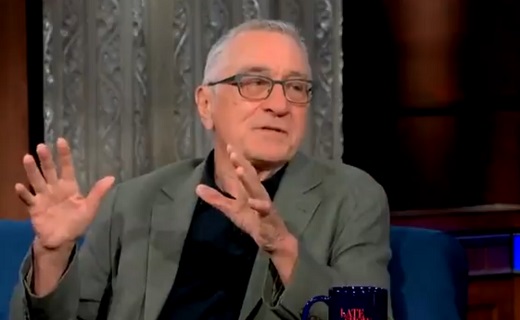 Anti-Trump actor Robert De Niro was on The Late Show with Stephen Colbert and said the following about President Joe Biden: “He’s doing a very good job. It’s a tough one, I couldn’t imagine – I could imagine how difficult it is,” he said, adding that Biden’s job is much harder than his own. “I have decisions in my own personal life that I’d imagine if [unintelligible] – what he goes through is a hundred times that. He’s doing the best he can and we gotta get through a bad period.”

Robert De Niro: Biden “is doing a very good job. It’s a tough one … He’s doing the best he can, and we’ve got to get through a tough period, period.” pic.twitter.com/YilF38k0SX

The Trump-bashing actor was praising President Joe Biden in just another way to slam former President Donald Trump despite Biden’s administration dealing with problems at the border, inflation, baby formula, and high gas prices – many problems having a massive impact on millions of Americans.

President Joe Biden also has a low approval rating, but De Niro continued to praise Biden regardless, also suggesting that he’s sleeping better at night under the current administration.

To add insult to Biden’s poll injuries, even CNN’s Chris Cillizza had something to say about it in his analysis, suggesting that low approval ratings were a featured part of Biden’s presidency, not just something that happened out of nowhere. As stated:

The last time that Biden had the approval of a majority of the American public in a Gallup survey was in July 2021 (Biden’s approval was right at 50%). The last time Biden’s job approval rating was higher than 45% in Gallup’s polling was August 2021, when it stood at 49%.
Since last August — so 10 months — Biden’s job approval in Gallup polling has never been higher than 43%. In fact, Biden’s poll numbers have been both consistent and consistently bad for the entirety of 2022. Here’s a look at all the Gallup polling so far this year:
* January: 40% job approval
* February: 41%
* March: 42%
* April: 41%
* May: 41%
Like I said: Remarkably consistent. And that’s not just confirmed in Gallup polling. CNN has measured Biden’s approval rating twice so far in 2022.