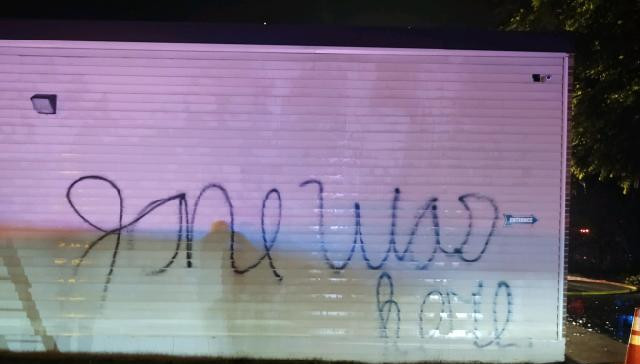 A pregnancy center run by a pro-life group came under attack outside of Buffalo, New York Tuesday morning, making it one of a growing number of such attacks that have taken place ever since the leak of a Supreme Court opinion concerning the possibility of overturn Roe v. Wade.

The attack happened at CompassCare, where several vandals broke out windows and then set fire to the medical office’s structure. Oh and they didn’t stop there. They also added a splash here and there of graffiti, leaving behind such cheeky slogans as “Jane Was Here,” which is typically used by a group of abortion radicals who call themselves Jane’s Revenge.

This group has already claimed responsibility for several other attacks across the country.

“This is the pro-abortion ‘Kristallnacht.’ Because of this act of violence, the needs of women facing unplanned pregnancy will go unmet and babies will die,” CompassCare CEO Jim Harden went on to write in a statement on the organization’s website.

“I wonder if Gov. Hochul will veto the Pregnancy Center Investigation Bill? I wonder if Attorney General Letitia James will investigate these cowardly criminals? CompassCare will rebuild because women deserve better. CompassCare will not stop serving because pre-born boys and girls deserve protection,” he said.

Here are more details via The Daily Wire:

The Daily Wire previously reported that the Madison Fire Department said in a news release that it believes the pro-life center was “intentionally set” on fire and that “the incident is being investigated as an arson.”

It was not immediately clear who set the building on fire. Wisconsin Family Action claimed the attack was from an “elitist anarchist group” that threw “two Molotov cocktails into the office, after breaking windows, and then proceeded to light a fire.”

“The arsonists posted graffiti on the outside of the building near the group’s offices. The message was, ‘If abortions aren’t safe, then you aren’t either.’ Anarchy 1312 took responsibility for the attack, leaving its logo on an outside wall,” the organization stated.

The Jane’s Revenge group later claimed responsibility for the incident, as reported by Bellingcat’s Robert Evans.

Earlier this week the office of a Wisconsin anti abortion organization was firebombed.

I have received a statement from the group claiming responsibility. They call themselves “Jane’s Revenge” (a reference to the Jane Collective).

“This was only a warning. We demand the disbanding of all anti-choice establishments, fake clinics, and violent anti-choice groups within the next thirty days. This is not a mere ‘difference of opinion,’ as some have framed it. We are literally fighting for our lives. We will not sit still while we are killed and forced into servitude,” the statement went on to say.

“We have run thin on patience and mercy for those who seek to strip us of what little autonomy we have left. As you continue to bomb clinics and assassinate doctors with impunity, so too shall we adopt increasingly extreme tactics to maintain freedom over our own bodies,” the statement added.

These people will stoop to any low in order to preserve the right to murder their unborn children. It’s truly sickening and depraved.