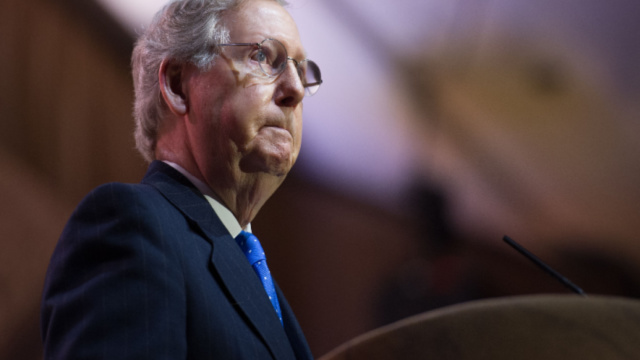 And you know what? That’s exactly what he should have done. The right to bear arms is a God-given right that is encoded in the Second Amendment of our Constitution in order to prevent big government tyrants like most modern-day Democrats from stripping us of our primary means of defending our liberty.

“In discussing how we might come together to target the problem of mental illness and school safety, we’ll get back at it next week and hope to have results,” McConnell went on to say about a legislative solution that would reduce mass shootings.

When he says target the problem, he specified it’s “mental illness and school safety.” @LEX18News pic.twitter.com/K5DCOlCqdV

For those in the conservative wing of the GOP, this was very comforting to hear especially after Mitch, who is not their number one choice to lead the party, last week had directed Senator John Cornyn (R-TX) to engage with Democrats on a ‘bipartisan solution’ on gun violence.

This week, instead of putting the blame on guns, in agreement with many in his caucus, the former Senate Majority Leader is now also calling for increased school security with the rise of mental health conditions. And that’s the proper approach to have.

One solution that has been suggested is to reduce entrances and exits in schools to one location in order to prevent potential shooters from having access to the building.

During his rally on Saturday night in Wyoming, former President Donald J. Trump chimed in on the issue.

“Whatever our differences may be on other issues, what on earth is stopping Democrats from immediately passing measures to ramp up school security,” Trump said

“How many more tragedies will it take until they agree to set aside their far-left political agenda and do what is really needed and actually works,” Trump added.

The Democrats, on the other hand, will just keep on on politicizing the recent shootings in Buffalo and Uvalde, using them as opportunities to gain the support of the American citizenry. Their leadership hopes this will allow them to advance their radical gun legislation, which would never pass during a regular legislative session.

Not waiting for bi-partisan input or support from the GOP, the Democrats are currently working on a large gun control package to be considered in House Judiciary Committee.

The package, Protecting Our Kids, includes eight bills designed to erode citizens’ Second Amendment rights, none of the eight bills would have stopped either one of the recent mass shootings.

Reportedly a few of the items included in this huge anti Second Amendment package:

As with other controversial and far-left legislation, the Democrats, with a small majority in the House, will most likely vote for the package. They will not have time to read the bills when presented, but hey they have recently made it a habit of not doing so.

A vote is expected to be held next week. If the package passes the House, it will move to the Senate, where without McConnell’s support, will not get the 60 votes necessary for cloture, the filibuster-proof threshold ending debate allowing for the vote only requiring a simple majority.