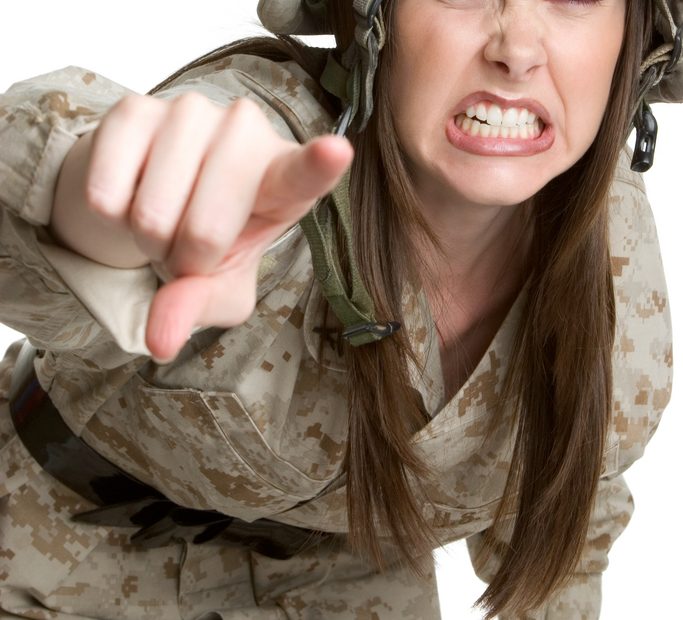 A video making the rounds on Twitter this past weekend showed a black woman of unspecified rank absolutely going bananas in a gymnasium. Her race and gender are relevant only because as one claims more intersectional points, then the more power they have in any situation. Clearly, this woman has spent a lifetime feeling simultaneously oppressed and emboldened to act in such a foolish manner.

Take a look below as this woman tries her hardest to make even the most seasoned vets gasp in shock at her brazenness:

What initiates the exchange is unknown, but once she has made her way down the stairs, that’s when the explicit language really ramps up, as reported and transcribed by BizPacReview:

“She eventually starts moving to the bottom of the room and toward the direction in which the superior officer had requested her to “go.”

She does so while yelling out more obscenities.

The latter remark triggers an audible gasp from the other soldiers.”

It’s at this point that a few higher-ranking individuals show up side by side and can be seen ushering her out. Naturally, she’s having none of it, yelling at them to get out of her way, not to touch her, and questioning why they’re focusing on her and not others. Maybe because you’re out of line?

Things really get interesting when she chests up to one of the men who showed up to show her out. She spins around and gets right in his face at the slightest provocation, which doesn’t seem like a fair assessment at all since he is merely reacting to her. Damn right he’s going to show her the door.

My best guess is that this person is mentally unwell. You don’t react like this, no matter the situation, unless something inside just snaps. There is also the fact that the hate-filled, evil woke doctrine of Critical Race Theory prevents anyone from ever being normal. Based on her choice of words, body language, and overall appearance at a military event, it seems safe to say she believes in woke doctrine. Wokeism produces chaos.

BizPacReview has more to say about wokeness in the military. It used to be that the military was above that and a black female could work alongside a white male, seeing not color but rather merit and rank. Not anymore, and it is the intentional by-product of demoralizing our armed services. BizPacReview writes more:

“Signs of the military’s “wokeness” began seeping through last year when Joint Chiefs of Staff chairman Gen. Mark Milley ranted and raved to Congress about so-called “white rage” and defended the practice of encouraging members of the Armed Forces to embrace racial essentialism.

Also last year, President Joe Biden announced that his administration intended to focus on ostensibly improving the military by making it more friendly to women.

Some of the administration’s projects, he announced, included updating the military’s requirements for hairstyles and designing “maternity flight suits.”

“And and some of it is going to take an intensity of purpose and mission to really change the culture and habits that cause women to leave the military,” he added.”

This story is syndicated with permission from The Blue State Conservative