Elon, DeSantis to Run on a Join “Not Completely Crazy” Ticket 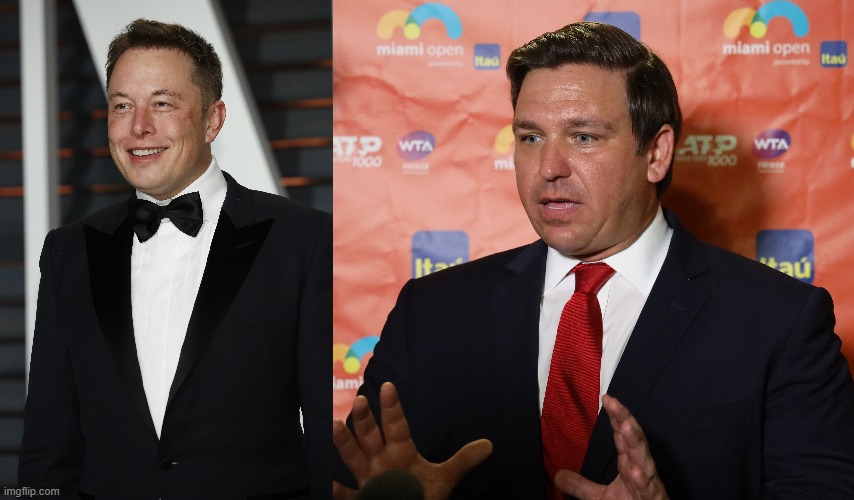 Elon recently announced that he would have to vote for a Republican in the upcoming election, saying:

In the past I voted Democrat, because they were (mostly) the kindness party.

But they have become the party of division & hate, so I can no longer support them and will vote Republican.

Now, watch their dirty tricks campaign against me unfold …

Judging by the relentless hatestream from the far left, this tweet was spot on

Judging by the relentless hatestream from the far left, this tweet was spot on

Well, that quickly escalated once DeSantis saw the tweet and reached out, suggesting that he and Elon run together in 2024 for president on a ticket that would eschew party affiliation and simply be labeled the “not batsh** crazy Boomer ticket.”

The duo announced their idea and ticket on Wednesday at a press conference on top of the SpaceX launch viewing platform. DeSantis, doing the speaking while Elon made margaritas with his Telsa-branded tequila, said:

“Here’s the thing, folks, everyone is just too darn crazy right now.

“On the right, people think that lizard people living under volcanos are eating children and that earthquakes are caused by Trump fighting them down there. That’s just crazy.

“On the left, meanwhile, people actually think doctors should be able to kill living, breathing babies and that men can be women and women can be men. I mean, what the f*** is wrong with those people.

“So, Elon and I are running on a joint ticket for sanity. We’re gonna cut government spending to the bone rather than spending trillions on nonsense like Trump and Biden, we’re gonna stop doctors from murdering children in the name of choice, and we’re not going to entertain delusional conspiracy theories about volcanoes and the Kennedy family, however funny those theories might be.

“A vote for us a a vote for returning to the great America that existed during the Victorian and Edwardian Eras in Great Britain, a time when commerce was free, men could do as they thought fit, and the government was as limited as is practicable. And no, calling us ‘racist’ or ‘sexist’ or ‘transphobic’ isn’t going to get us to change that policy platform.

“We’ll spend less, defend the country from illegals and foreign enemies, and otherwise leave you alone. Oh, and Elon will be doing campaign events from space, which will be super cool.”

Elon toasted that with a “cheers” and then started chuckling at the suggestion that Dogecoin would be the new currency, responding that that was unlikely but that the DeSantis-Musk administration would be buying Bitcoin for the national currency reserve and would be taking “direct action” against those that censor speech online. DeSantis added that he’d nationalize any industry pushing to trans the kids and fire all the wokies, which drew massive cheers from the audience.

Early polling puts the dual ticket at 83% popularity among the electorate, with only transgenders, current politicians and bureaucrats, and Blue Origin employees being uninterested in the ticket.