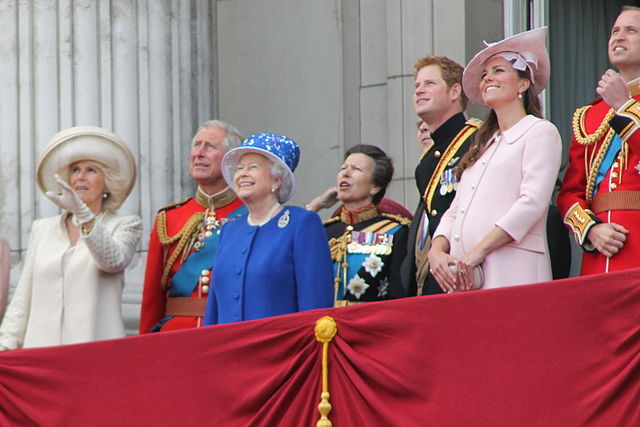 While they may be far from ordinary with their lavish lifestyles and high profiles, Britain’s Royal Family has trials and tribulations like any other family. In fact, when it comes to dysfunctional families, the clan of Queen Elizabeth II is second to none. Infidelity? Check. Divorce? Check, check. Infighting? Big time check. And it appears the Queen has had just about enough with a certain trio of her kin.

According to Woman’s Day, Prince Harry and his wife Meghan Markle – aka the Duke and Duchess of Sussex – along with Jeffrey Epstein pal Prince Andrew, have not been invited to participate in the annual Trooping the Colour ceremony on June 2nd.

While the name of the event may not ring a bell, we’ve all seen the photos of the ritual over the years. Typically, the video and pictures will show the Queen in the center of an assembly on her Buckingham Palace balcony, surrounded by her extended family as they wave to the adoring Brits below. But this year’s formalities aren’t just any old photo op, this year is the Queen’s Platinum Jubilee.

This past February, the Queen marked her 70th anniversary as the United Kingdom’s monarch, the first in British history to achieve such a milestone. It’s a big deal for our friends across the pond, which makes the rejection of Harry, Meghan, and Andrew that much more significant. The Queen seems to be fed up with the shenanigans of her son, grandson, and granddaughter-in-law. And it’s hard to blame her.

While Andrew’s escapades with Epstein, which apparently required the prince to pony up boatloads of cash to an accuser in order to make the problem go away, is a major black eye for the monarchy. Andrew is a disgrace and would likely be facing significant jail time if he wasn’t the privileged son of the queen. It’s truly a reprehensible situation. But the betrayal we’ve seen from Harry and Meghan is arguably even worse, and even more detrimental to the monarchy than Andrew’s despicability.

Last year, Harry and Meghan essentially renounced their royalty when they decided to withdraw from their official duties as members of the royal family, choosing instead to “embark on new lives in the private sector.” Additionally, right around the time of their break from royalty, the couple decided to do an interview with Oprah Winfrey.

The Sussexes accused their relatives of duplicity and of being apathetic to the couple’s woes: poor Harry and Meghan. And, of course, they accused the family of racism, though they neglected to name names. The family has officially denied all the couple’s accusations, but that hasn’t stopped the dynamic duo. Since their Oprah interview, Harry and Meghan have been willing to repeat their story to anyone who will listen. They also continue to play the charade of not being part of the royal family while simultaneously trying to take advantage of the benefits that royalty brings. It’s all a farce.

If nothing else, watching the inanity of the royals from the other side of the Atlantic reassures us that our ancestors did the right thing in 1776. It also puts us in the remarkable position of sympathizing with Great Britain’s monarch and hoping she prevails with her intrafamily conflicts.

Jordan Case offers opinions from the unique perspective of both entrepreneur and parent and is a regular contributor to The Blue State Conservative. Jordan does not participate in the cesspool of social media.