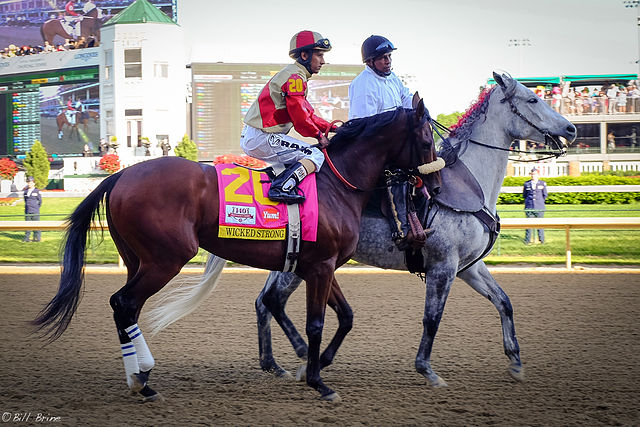 Woke ESPN must hate horse races. They can’t attack the horses as racist. Well, at least not yet, anyway. I’m sure someday they will try and find a way to do exactly that. We’ve seen crazier things from these folks, right?

However, they can go after peripheral people, which means in this case the investigative energies that they could be devoting to the NBA’s ties with communist China or dead-if-you’re-gay United Arab Emirates are spent filtering through old tweets from rich white dudes that like horses.

Because to the radical left there’s no bigger boogeyman than a rich white guy. To them, they are Satan dressed in a power suit.

Have we hit rock bottom as a society yet? Seriously, how pathetic are these people?

Clay Travis’s Outkick reported on this desperate and highly ridiculous effort to ridicule and cancel everyone that doesn’t praise Kamala Harris as the most intelligent and deserving Veep in our country’s history. Here is their coverage:

“On Wednesday, during an Outside the Lines episode, ESPN host John Barr interviewed Eric Reed — owner of Mercery [sic] Equine Center, which houses reigning Kentucky Derby-winning horse Rich Strike — and asked Reed if he had ever tweeted anything remotely negative about Vice President Kamala Harris.

In typical ESPN fashion, the host had a tweet in question hiding in his back pocket after a considerable investigation over a matter that no one would care about if not for the hard-hitting journalism at ESPN.

Barr’s tweet in question, posted back in January, poked fun at Kamala Harris by stating that her only qualification for the role was being ‘good on her knees.’”

If you think it’s too good to be true…

The tweet in question comes January of this year and consists of less than ten words. This is newsworthy? Also, isn’t it kind of true? And funny?

Then again, the left is not widely known for having a great sense of humor. Look how cancel culture, which these knuckleheads helped to create, has utterly destroyed the comedy movie. Think about it.

When is the last time you watched a good comedy film? Probably a long, long time.

Hollywood is too scared to offend people to make good funny pictures.

Kamala Harris is unfit and unqualified to organize a bake sale, let alone hold the various governmental positions in her career. Vice President, Senator, Attorney General, big-city District Attorney – and all for someone that failed the bar several times and hasn’t figured out why millions of people are flooding America’s porous borders.

Or maybe she does know why and doesn’t care, because these individuals are the future of the Democratic Party voter base?

At the same time, we know of her sordid affair with then-mayor Willie Brown, among others presumably. It doesn’t take much to put two and two together – a loose and unimpressive woman gets intimate with powerful men and voila! She’s climbing the ladder faster than she can take her clothes off.

Look, you do you, Kamala. That being said, a public figure rightfully and deservedly will be publicly scrutinized. If she is embarrassed – or in this case if ESPN thinks you shiould be ashamed for noticing her scandalous promotions – that’s not our fault. That’s yours.

Kamala Harris was sold to us as a glass ceiling shatterer. She was the first woman in her position. How’s that working out? She is the opposite of what a strong female role model should be, if kids should even be looking to a place like the nefarious underworld of politics in the first place. Clueless, mean, dumb, undeserving, narcisstic, and vengeful are not qualities I want to see in my own children. Her success, if it was indeed earned by questionable ethics, is not truly success. It’s prostition with a different form of payment.

And that’s the problem ESPN and the entire left have with this idea. They know Kamala Harris is a fraud. They know she doesn’t deserve to be there. They simply can’t let us know that too.