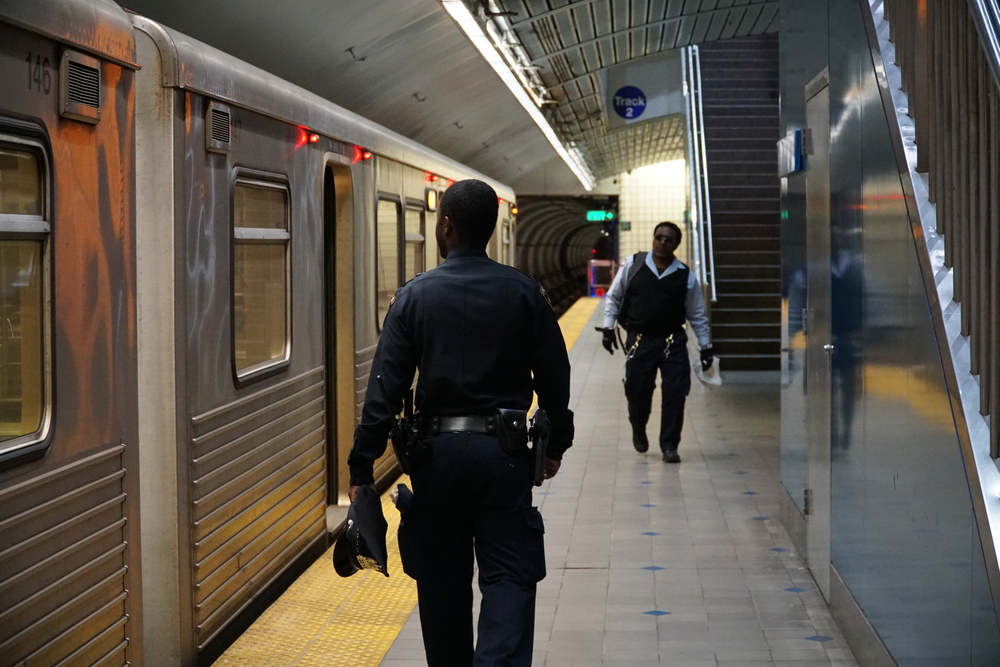 As crime in the Big Apple continues to surge, NYPD are on the look-out for a thug who violently attacked a homeless man with a knife on a busy subway platform last week.

The victim, 52-year-old Angel Trujillo, was slashed across the face and chest by the knife-wielding assailant as he waited for a train on Broadway Junction subway in East New York. He was then flung onto the tracks of the busy station but fortunately was not struck by a train.

Shocking CCTV footage released by NYPD on their CrimeStoppers Twitter page shows a man in a black Nike hoodie placing a phone and a pair of headphones on the floor of the platform at around 9:45pm Wednesday evening.

As Angel moves along the platform pushing a grocery cart containing his belongings, he appears to accidentally step on the man’s headphones. The suspect can then be seen approaching Angel and the men engage in a brief conversation before he draws a boxcutter from under his clothing and a fight ensues.

Angel’s grocery cart is knocked over in the scuffle and he manages to throw a jacket over the suspect’s face as the two wrestle across the platform. The suspect slashes at Angel numerous times and both men end up falling off the edge of the platform onto the tracks below where they continue to exchange blows.

Speaking to NY Daily News, Angel said he forgives his attacker and explained that the assault began because he had trodden on his headphones:

“I forgive him because I’m also homeless. And I know a lot of people living that life and it’s hard.”

#NYPD hunts knife-wielding man who slashed 52-yr-old man in the chest and head on #Brooklyn #subway platform before wrestling victim to the tracks in crime-ridden Big Apple pic.twitter.com/Vx7byB9C4S

Angel explained he had attempted to reason with the man before the attack began, asking him why he had placed the headphones and the phone on the subway’s floor:

Angel had been on his way to visit his sick sister and diabetic son before the attack, which left him with a gash to his torso which required multiple stitches to close, and also injuries to his face, ear and finger.

The attack is one of many examples of a long string of violent assaults on New York’s subway. According to NYPD data, Subway crime has risen a frighteningly high 63 percent this year alone, with a staggering 201 felony assaults having taken place this month alone, up 25 percent from this time last year.

“It’s crazy, so many things are happening on the train,” Angel told Daily News.

“The cops show up after the incident happens — so I tried to deal with it myself, and I got stabbed.”