“Faith is a Form of Courage”: Watch Jordan Peterson Give a Stunningly Powerful Commencement Address at Hillsdale 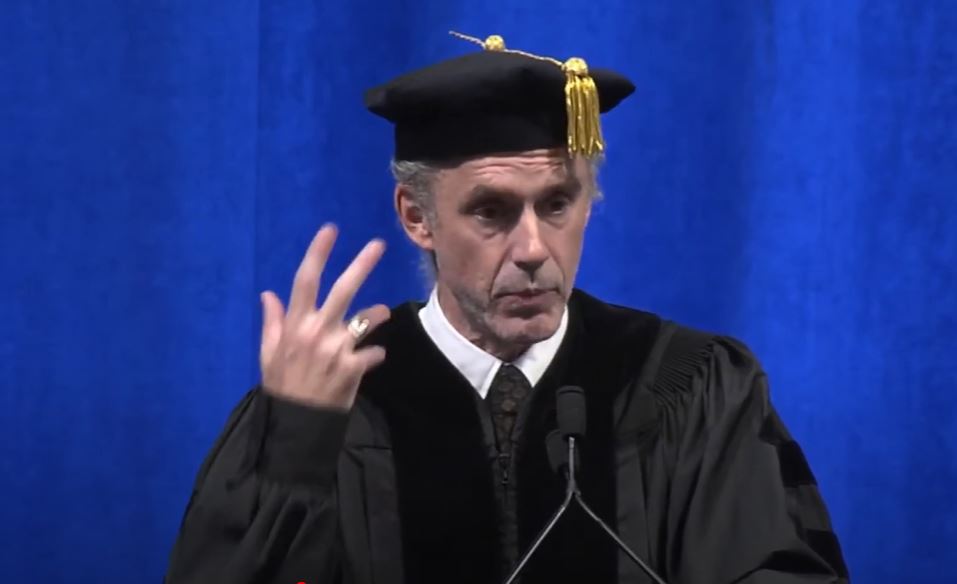 Jordan Peterson might be one of the best minds of our time, an obviously brilliant man willing to speak the truth as he sees it and pursue the threads and strands of the truth wherever they might lead.

As such, it’s rare to see him invited to do anything. The left, which hates truth and common sense above all, has gone absolutely crazy and is, as such, unwilling to invite him to talk and speak about anything, much less during important events such as a college commencement.

But, fortunately for Peterson and those conservative college kids looking for a non-woke college, Hillsdale is run by reasonable people, many of them conservatives. So, acting as all who want to pursue the truth should, they invited him to speak to the students.

The result was truly brilliant, truly inspirational. Watch him here (starting about 41 minutes in):

In one part of the speech, Peterson, speaking about the concept of a crossroads, a place at which many of the college graduates likely found themselves, said:

“A crossroads—the metaphor works because you make a decision. You go one direction or another. There’s an old ‘blues’ idea that you meet the devil at the crossroads. I always wondered why that was—I found it true. It’s a really compelling idea.”

“Why do you meet the devil at the crossroads? And the answer is, most fundamentally, because when you come to a place in your life where you have to make a choice … you aim up or down. And there is always an agent of temptation at every choice point, enticing you to aim down.”

Peterson also spoke on sin, diving into what the term meant in an attempt to shed light on how people should be thinking about it, saying:

“It implies that it has something to do with aim or the lack thereof. I love that. … There’s a variety of ways you can miss the mark, right? Don’t aim at all—that’s a good one. Assume there is no such thing as aim. Assume all aims are equal.”

Peterson then, in one of the most powerful and profound parts of the speech, described faith itself as a form of courage, saying:

“One of the things I’ve thought a lot about in relationship to faith — we have this idea, and it’s not a good idea, and it’s certainly an idea for which religious people are often pilloried — that faith means the sacrifice of reason and the willingness to believe things that are patently not true … I don’t think that’s what faith is at all in some fundamental sense. I think faith is a form of courage.”

“If you’re hurt by life — and you will be — it’s understandable that you might react in a nihilistic and hopeless fashion … and I think part of what helps you through that is faith,” Peterson described. “And part of that faith is that it’s incumbent on you … to maintain faith in the fundamental goodness of existence, including your own, despite the evidence to the contrary.”

“When you’re at the crossroads and you’re counseled to despair — rise up in courage and see if you can resist it. It’s better for you, and it’s better for the people around you.”

Also, in a message that should be at the top of many a mind in these interesting yet unfortunately hubristic times, Peterson expounded upon the Tower of Babel and lessons from that story, saying:

“It’s a continual temptation for human beings to build complex organizations that get too high. So what does that mean? How about too many layers? Not local enough, not distributed enough, right? Too separate from the people that they serve.

“It’s also a Luciferian story. Lucifer is this spirit of intellect — the light-bringer who’s flown too high and challenges God Himself, and falls. … It’s a symbol of prideful intellect. And it is the prideful intellect that raises itself up against what is most properly placed at the highest place — which is what God is.

“I’m very opposed to the idea that the fundamental human motivation is power — which is pretty much what every student is taught at every level of their education, in every educational institution except a handful across your country. It’s such a dismal philosophy. … You could not formulate a more pathological philosophy. It obliterates your faith in society, and it eradicates the notion of the individual. It removes the notion of good faith and goodwill, and it makes communication impossible.”

Ending, Peterson encouraged the kids to aim higher and at higher things, saying:

“You learn to optimize an aim, and then you see once you’ve learned to optimize an aim across a set of goods, you start to aim at what unites those goods … by practicing any good in any rigorous sense, and making the proper sacrifices in that direction, you simultaneously learn to approach the good that is the sum or the essence of all those proximal goods.”

“The essential insistence in Christianity is that the good that unites all those goods is the same good that’s reflected in the image of Christ, which is an image of acceptance of the suffering of life, and the necessity of serving the lowest as the highest calling.”

“It’s kind of earth-shattering, in some sense, to take this with real seriousness. It’s all very frightening if you’re not afraid of that vision and what it implies for you and your soul … but it’s also … an endlessly promising vision of what your life could be.”

Brilliant! Hopefully many more listen to his speech and learn how to get their lives in order from it.