Both Obama Girls Are Dating. Here Are The Rich Kids They Are Linked Up With

Personally, I do not care what the Obama girls – Malia, 23, and Sasha, 20 – are now up to. Aside from unique circumstances in their childhood, they are people like anyone else leading lives interesting only to themselves. For my money, only Barron Trump’s suborbit height is worth following.

Politically, however, it’s worthy pointing out that far-left dad Barack and America-hating mom Michelle raised two girls that got quite accustomed to wealth, luxury, privilege, and elitism. Now, as the latter recently shared on Ellen, both are quite content remaining trapped in the upper echelon of society’s wealthy influencers. Peons need not apply.

Since 2017, Malia has been dating a rich kid Brit whom she met at Harvard. He is Rory Farquharson, and the Daily Mail notes he “was brought up in a six-bedroom $2.2m home in Suffolk and attended posh Rugby School.” Good stuff. He is also white, which is always the case. Ketanji Jackson Brown, Kamala Harris, Lori Lightfoot, Don Lemon, etc. all find ways to condemn this great nation’s eternal legacy of white supremacist shame – then turn around to find the next white guy.

All whites are evil. Except the one these black race-grifters find. I am sure Rory shares Barack’s politics and debases himself every chance he can with white guilt, but how does anyone seriously square this circle? In any event, Malia and company don’t mind white supremacy when it benefits them.

As far as Sasha, the Daily Mail reported that she is dating, while not a white dude, an equally privileged black by the name of Clifton Powell, Jr. We are supposed to know this name because his dad appeared in a movie with Jamie Foxx.

“The second child…was brought up in the family’s Ladera Heights home. Ladera Heights, along with neighboring Windsor Hills, Baldwin Hills and View Park, has been nicknamed ‘the Black Beverly Hills’ due to its expensive housing and celebrity residents, which at one point included Tina Turner and Ray Charles.”

The Black Beverly Hills. Why don’t we ever hear about places like at? Instead, we get force-fed images of rotting slums in Baltimore and other third-world ghettos like Chicago, where blacks murder other blacks with impunity. How come no one ever answers the question of how Barack, Sasha’s new squeeze, and others managed to do just fine in this great nation? 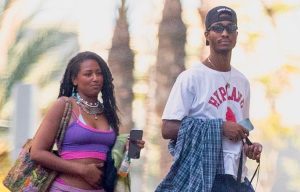 Discussing these changes, Michelle went on Ellen Degeneres’ show, which is somehow still a thing, and explained her reaction to the two girls’ new lives:

“Now they are bringing grown men home. Before it was just, like, pop bands. Now they have boyfriends and real lives.”

Sasha’s relationship is much newer than older sister Malia, and the Daily Mail had some additional pieces of information on him:

“[S]et himself up as a commercial director with a website that uses his old CP3 nickname in the title.

Reels show he has created content for Peloton and Nike. Another video, called Rookie Ratings, was made for Madden NFL 22 – a video game based on the National Football League.

[He] began as a writer creating scripts for TV which landed him ‘a development deal in the TV space’.”

I don’t know what any of that means, but it sounds lucrative. Perhaps this gaggle of fools, all L.A.-based from the sounds of it, can donate their families’ collective wealth to clean up the city. Problems like crime and homelessness just require infusions of cash, right? More likely, though, they’ll just keep up with their ruling class ways and make the commoners do all the work.