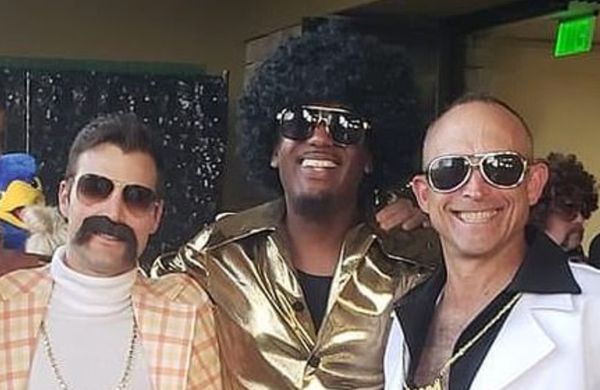 Hat tip to American Thinker’s Thomas Lifson for bringing a local Arizona story national prominence. In the uber-wealthy and racially white enclave of Scottsdale, corporate male hacks and wine moms without meaning in life failed in their virtue signal on a grandiose scale.

“Two diversity advocates in the Scottsdale, Arizona school district were so eager to find racism lurking in a (highly successful) fundraiser that’s [sic] they accused a black DJ hired for the event of wearing blackface. Evidently, the costume and/or hairstyle of the SJ at the 70s-themed event triggered them somehow to accuse Koko Hunter, second from the right in the photo below, of the sin of racial impersonation of an African American via blackface.”

As bad as this sounds, it is actually much worse. The Daily Mail noted that not only did these clowns vociferously complain before doing their basic homework, they did so rudely and with the arrogant self-0assuremtn that only a braindead leftist could muster. Unfortunately, we do not have a copy of the email, but here is how The Daily Mail wrote about the communication:

Jill Lassen and Stuart Rhoden, who advocate for diversity at the Scottsdale Unified School District in various capacities, wrote scathing letters of complaint after DJ Kim Koko Hunter appeared at a PTA event, and they mistook him for a white man.

And, if this story weren’t bad enough already, one of the accusers – the black guy, no less – essentially doubled down on his original. The Daily Mail covered his apology via Facebook post:

“In a Facebook post last week, he apologized to ‘dude’ for the mistake, only to then double-down and suggest that Hunter was wearing makeup to make himself look darker.

‘Let me be clear, a Black man, apparently in Black face is an entirely different discussion than a White person. However I did not state that the person was White.

‘It was assumed that was my intent, and perhaps it was, but nonetheless, looking on his FB page (photos below), it seems at the very least he is in darker make-up if not “Black face” or I am completely mistaken and it’s the lighting of the patio,’ Rhoden said.

‘So here’s what I want to say. I apologize to dude for the implication, but the sentiment still stands, Black face by anyone, in this day and age is problematic. I also apologize to folks who reposted and made other statements based on my assumption.’”

You can’t make this up. A black man hellbent on finding traces of white supremacy in every corner accuses a black man of wearing black face…to darken his skin? This prompts so many questions. If racism were real, why would a black man want to appear more black? If racism were real, how did this complete bozo land a well-paying, supremely white-collar (pun intended) gig at the admittedly embarrassing venue of Arizona State AND a role in the white, ritzy district of Scottsdale Unified?