There is a lot of talking and rumor-mill churning over Elon Musk and his potential future plans for Twitter right now.

Musk is not just a billionaire inventor-futurist. He’s also a diehard proponent of freedom of speech. He’s made this abundantly clear over the last few years, especially as cancel culture’s pure insanity has reached heights that are night to unfathomable.

As you likely know, Elon became Twitter’s biggest shareholder when he spent billions and gained 9.2 percent of the company.

At that point, Twitter’s CEO Parag invited Elon to take a seat on the Twitter board of Directors and Elon accepted the invitation, eager to make “changes” to the company.

Right after Elon said he’d join, Parag made a statement that said “No matter what, Trump will not be allowed back on the site.” Wow. This guy really hates our former president. Hey, he didn’t seem to do too bad a job if I remember correctly. He certainly wasn’t a disaster like the current fellow in the White House, that’s for sure.

Right after that, Elon began tweeting a lot of negative things about Twitter, like turning the San Francisco HQ into a “homeless shelter,” taking the “w” out of the name, and making it “Titter.”

He was definitely snarky, and it was fun to watch.

So clearly, Elon was annoyed by something, because on April 9th, he let Twitter know he was NOT joining their board.

It was Elon’s decision, not Twitter’s.

But it was now painfully obvious there was a lot of stuff going on behind the scenes.

Many people speculate that Elon, who thought he could make changes on the board, got tremendous pushback from Twitter, and that’s he pulled out of the deal.

Doing this would now enable Elon to unleash a “hostile takeover” of Twitter — because if he was on the board, they would cap his stock purchasing at 14.9%.

Is that his plan? Is that why he’s now backed out of the board deal? So he can take over Twitter?

Well, a new tweet that Elon “liked” on the social media platform gives us our biggest clue yet…

The tweet Elon “liked” was published by a person who goes by the handle “Tank.”

He was responding to Twitter’s new CEO’s statement about Elon backing out of being on the Twitter board of directors.

Elon has decided not to join our board. I sent a brief note to the company, sharing with you all here. pic.twitter.com/lfrXACavvk

And here is Tank’s reply:

“Let me break this down for you: Elon became largest shareholder for Free Speech Elon was told to play nice and not speak freely”

That is the tweet Elon “liked,” and I took a screenshot of it: 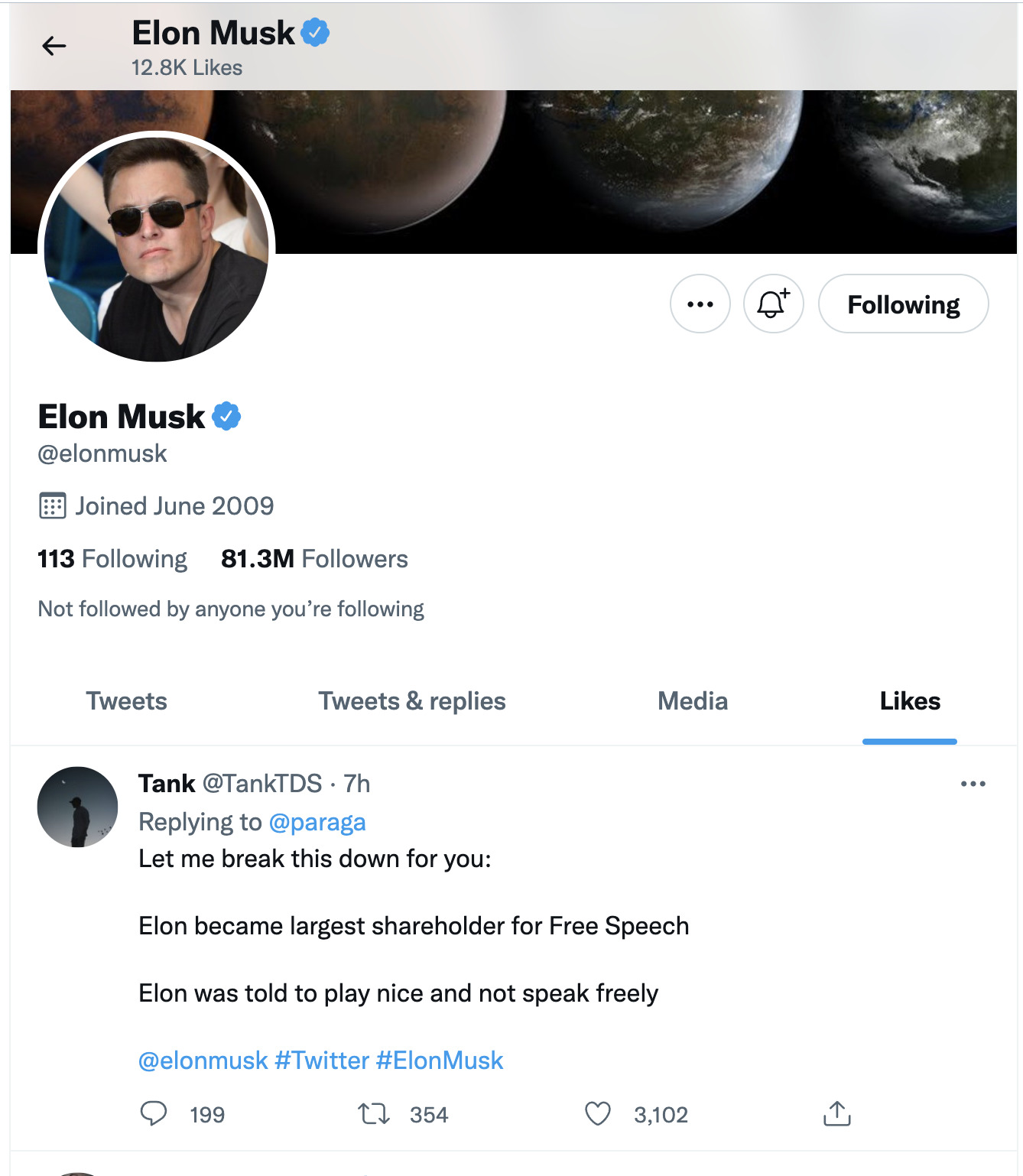 So, what most people believe at this point is that Elon, thinking he could “work” with Twitter and get some much-needed changes done, realized through recent talks he was having with them, that was not going to happen if he was on the board.

So he said adios.

That tweet that he liked is the biggest clue we have yet about Elon’s next move — we now know he left the board idea behind because he could not make changes… and that’s exactly what he wants to do… make changes… so the only way for him to do that, is to take over Twitter.

Here’s some info on what a “hostile takeover” is:

Factors playing into a hostile takeover from the acquisition side often coincide with those of any other takeover, such as believing that a company may be significantly undervalued or wanting access to a company’s brand, operations, technology, or industry foothold. Hostile takeovers may also be strategic moves by activist investors looking to effect change on a company’s operations.

When a company, investor, or group of investors makes a tender offer to purchase the shares of another company at a premium above the current market value (CMV), the board of directors may reject the offer. The acquirer can approach the shareholders, who may accept the offer if it is at a sufficient premium to market value or if they are unhappy with current management. The Williams Act of 1968 regulates tender offers and requires the disclosure of all-cash tender offers.1

In a proxy fight, opposing groups of stockholders persuade other stockholders to allow them to use their shares’ proxy votes. If a company that makes a hostile takeover bid acquires enough proxies, it can use them to vote to accept the offer.

A hostile takeover doesn’t look very easy to me, but I am not a “billionaire” who started Tesla.

Let’s hope Elon can make something like this happen.