Elon Musk: From Riches to Rags and Baby Mama Don’t Like It

Geeky billionaire Elon Musk’s pop-star ex-girlfriend ‘Grimes’ is as out-there as a SpaceX rocket as she reveals all in an exclusive sit-down interview with Vanity Fair.

According to the kooky popstar, whose real name is Claire Boucher, the 33-year old gave juicy details about her relationship with Elon Musk, now the richest man on the planet (planet Earth, anyway).

Dressed in a shirt emblazoned simply with the word ‘algorithm’, Grimes, or ‘c’ as she’s occasionally called (the science-y symbol for ‘speed of light’), says the pair never lived a “billionaire lifestyle”.

“Bro does not live like a billionaire. Bro lives at times below the poverty line,” she told Vanity Fair. 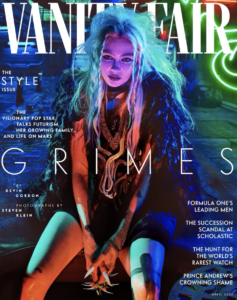 “To the point where I was like, can we not live in a very insecure $40,000 house? Where the neighbors, like, film us, and there’s no security, and I’m eating peanut butter for eight days in a row?”

Grimes said that although Musk with worth an estimated $228.7 billion, the SpaceX program sucks up a lot of money. As well as launching satellites, the program aims to send humans to Mars within the next four years, perhaps with the hope to eventually sustain a civilization on the planet.

According to Grimes, the project doesn’t make any money, but is instead a humanitarian-based operation designed to benefit the future of the human race.

“The Mars project is hard. There’s no income for it,” she explained.

“There’s no way for it to make money. [His Mars project] is for the benefit of humanity, and it’s dangerous and it’s expensive, and people are like, “He’s hoarding money!” No, he’s spending everything on R&D.”

The pop-star has two children with Musk – a son, X  Æ A-12, which she pronounces X. AI Archangel, and a daughter, Exa Dark Sideræl after dark matter.

The existence of the second child, Exa, was not publicly known until Grimes was forced to admit the pair had had another baby when the Vanity Fair journalist heard the baby’s cries in the next room.

Although the couple have an on-off romantic relationship, they now live separately and co-parent the kids – an arrangement which Grimes suggested works best for both of them. The kooky pair officially split last year, but Musk, the CEO of both SpaceX and Tesla, said they were still in regular contact.

When prompted by Vanity Fair to speak about her children, Grimes became uncomfortable and said she’s very keen for her children to remain out of the public spotlight.

“Whatever is going on with family stuff, I just feel like kids need to stay out of it, and X is just out there. I mean, I think E is really seeing him as a protégé and bringing him to everything and stuff,” she said.

Well-known for sudden and unexpected maneuvers, Musk suddenly declared last year that he would “own no house” before selling off nine Californian mansions worth an estimated $144 million.

He proceeded to move into a tiny pad in Austin, close to the SpaceX launch site.

“My primary home is literally a ~50k house in Boca Chica/Starbase that I rent from SpaceX,” he Tweeted.

While Grimes implied the couple had very different tastes and needs, she said she sees Musk as the love of her life and best friend.

“We live in separate houses. We’re best friends. We see each other all the time…. We just have our own thing going on, and I don’t expect other people to understand it,” she said.

“This is the best it’s ever been…. We just need to be free.”