There are very few celebrities in progressional sports that are known for using their wealth and influence for good, Shaquille O’Neal is one of them.

The four-time NBA champion who played with Kobe Bryant on the LA Lakers and with the Miami Heat is one of the most recognizable people on the planet, but according to the basketball legend, he doesn’t mean he wants to be treated or expected to live like a celebrity.

In fact, he thinks most celebrities aren’t great people when it comes to their treatment of others.

These celebrities are going freaking crazy and I don’t want to be one. I denounce my celebrity-ness today. I’m done with it. I don’t want to be in that category. Celebrities are crazy, they really are. Don’t call me that anymore. These people are out of their freaking mind with how they treat people, what they do, what they say. That’s never been me. I never want to be looked at like that…I came from nothing. But, just because I made it doesn’t mean I’m bigger than you, smarter than you — just because I have more money doesn’t mean I’m better than you. I’ve never been that way and I never will be that way. So I don’t want to be in that category of people.

“My motto lately is it could be worse, and that could be you.”

Shaq says he goes into stores looking for moms to help out. In this moment, he said he saw a mom at the register who couldn’t afford school laptops for her kids. Shaq stepped up and said, “I got you.” 👏❤️ pic.twitter.com/kjynu2GKnH

In addition, Shaq has been in at least 29 movies introducing him to more of the population.

Shaquille just intervened for a family in need.

He surprised a family of 11 with two brand-new vehicles.

“Today Shaq blessed us like never before,” the Collins family captioned their post on Instagram Wednesday. There was no other information about where it occurred. The comments were noted by SportsCenter and ESPN in a post on social media.

“Last night we had a surprise visit from Shaq,” the Collins’ post read. “He took us to dinner as a family at babes chicken. It was so much fun to just hang out and eat dinner with him.”

“And then today!” the post continued. “He started the day off by taking us to the Mercedes dealership to get us a new family 15 passenger van.” 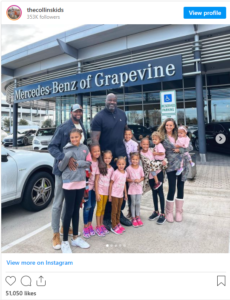 The post noted how the large family was outgrowing their 12 passenger van and called his gift an “outrageous blessing,” before sharing how he later took the family out to dinner and ended up tipping the waitress “$1000 after her car broke down” that day.

The family’s post also mentioned what happened after dinner “when he saw” the husband’s truck had been “without air-conditioning and heat for a while.”

“He took us to a Ford dealership and blessed us with another truck,” the message on social media shared. “He also spent time encouraging us and loving on our children and speaking life into our family. I am completely lost for words. Somebody wake me up because I must be dreaming.

Thank you @shaq times a million times!!! You have been such a blessing to us in so many ways.”

The NBA legend has also been very generous in the past, as noted by Fadeaway World. The sports analyst once surprised a kid with a new bike.

In a personal story, O’Neal dined at a restaurant I was managing in Santa Ana, Ca. Following a Tex-Mex meal with a few other Lakers, he left the bartender a $100 tip on a $60 bill.

It is reported he once tipped a server $4,000 simply because the person asked for it, the outlet noted. Another time, he bought a kid two pairs of shoes after he saw him in a store upset because his parents couldn’t afford to get him shoes, the report noted.

Can you imagine what the world would look like if Shaq was the norm and not the expectation?