For two years Dr. Anthony Fauci, the director of the National Institute of Allergy and Infectious Diseases (NIAID) and the Chief Medical Advisor to the President, has been in the news daily, seemingly twenty-four hours per day.

His advice has at best been confusing and at worst, politically driven.

On March 8, 2020, the soon to be known as flip-flopping-Fauci and infectious disease expert told 60 Minutes; There’s no reason to be walking around with a mask,”

Dr. Fauci defended not wearing a mask while watching a Nationals baseball game On, July 23, 2020. 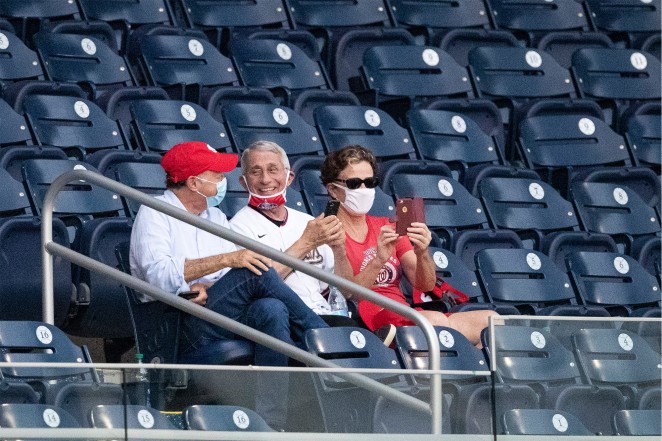 “I had my mask around my chin. I had taken it down. I was totally dehydrated and I was drinking water, trying to rehydrate myself,” Fauci insisted. “And by the way, I was negative COVID literally the day before. So I guess people want to make a big event. I wear a mask all the time when I’m outside. To pull it down to take some sips of water and put it back up again, I guess if people want to make something about that, they can. But to me, I think that’s just mischievous.”

Fauci told MSNBC Monday he does not believe that leaders in states that have eased Covid restrictions in recent weeks were motivated by politics.

Democratic-majority states such as California, Connecticut, New Jersey, and New York have eased significant restrictions, such as mask mandates, since late in January.

Democrats are widely expected to face challenges to their slim House and Senate majorities, and Republican critics have suggested their motivation is to make life easier for voters to help mitigate some losses.

On Hallie Jackson Reports Tuesday, the host commented on the easing of restrictions following a spike in Omicron infections.

Jackson said, “It felt like an avalanche of more and more states loosening up and ditching mask mandates.”

She then asked Fauci, “In your view, is it happening too soon?”

Fauci said that case numbers are “going in the right direction,” before he added: “You don’t want to be declaring victory prematurely, and that’s the reason why the CDC, who continues to monitor these things and will make modifications of recommendations as we see the trajectory continue to come downward.”

Jackson then asked Fauci, “So, do you think the local politics are overriding the science, or largely no?”

“I wouldn’t say it’s the politics,” said Fauci, who is not averse to weighing in on political aspects of covid policy. “I think it’s the different evaluation of what’s right for a particular community.”

He continued, clarifying his current view.

When you use the word politics, I’m not sure it’s that. I just think at the local level, there’s a strong feeling of needing to get back to normality. Now, if you look at the science of it, I mean the direction is going in the right direction. Are we there yet in every single place throughout the country? I don’t believe so. But there are some places that are looking at what the trajectory is, and are saying let’s go with it.

I think Fauci has loved all the attention and is frustrated that blue states are lifting the COVID restrictions without the approval of the NIH CDC.

Hopefully soon We The People can only be forced to see flip-flopping and failing Fr. Anthony Fauci on the History channel.