Once again a public school has crossed the line in seeking to encourage and solicit sexual thoughts from elementary-aged children.

With more and more teachers and classroom aids admitting on social media that they are teaching LGBT, CRT, and sexual material into their classes, without the approval or knowledge of the school administrators, criminal charges need to be determined as a future deterrent.

The School district in Enfield, Connecticut has been caught asking eighth-graders to share their sexual desires in the form of pizza toppings.

After getting caught the school officials quickly blamed the distribution of the assignment to the children on technical issues with was done by mistake.

‘Now that you know this metaphor for sex, let’s explore your preferences!’ explained the instruction pamphlet distributed to students in a recent health class at John F. Kennedy Middle School.

As if that wasn’t explicit enough, the instructions offered some suggestions.

‘Here are some examples: 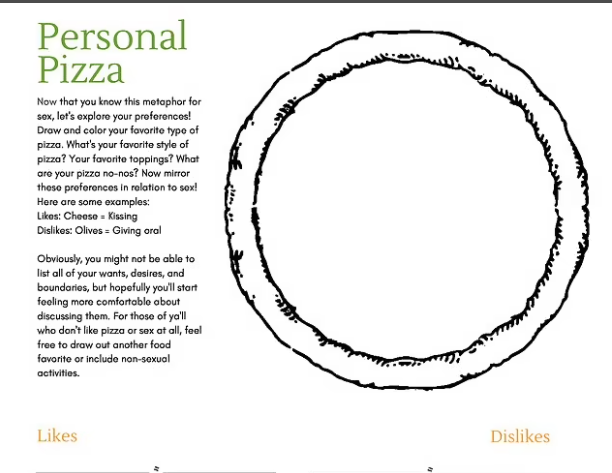 One parent whose 13-year-old son was in the offending health class in December told DailyMail.com she was mortified when she asked her boy how his day went and he explained the hidden meanings of pepperoni and olives.

Her son told said that he didn’t even know the meaning of the word ‘oral’ before that class. ‘I didn’t know what it meant so I looked it up on my school iPad,’ the boy said, sheepishly. ‘I just sort of laughed. I was surprised.’

‘When he told me about it, I was absolutely shocked,’ the mother, who asked not to be identified, said. ‘He’s 13 years old! What gives teachers the right to have that conversation with our children?’

An Enfield group of parents reached out to Brie Quartin the district’s Health and Physical Education Coordinator, to complain about the assignment.

After class, some of the students went home and told their parents. Soon the pages were shared on Facebook, and the entire community got wind of it.

An Enfield group of parents reached out to Brie Quartin, the district’s Health and Physical Education Coordinator, to complain about the assignment.

‘The incorrect version, as opposed to the revised version of this assignment, was mistakenly posted on our grade 8 curriculum page, and was inadvertently used for instruction to grade 8 Health classes,’ Quartin wrote in the email, which was posted on the parent group’s website. ‘I caught the error after our curriculum revision in June but failed to post the intended version.

‘The correct version of the assignment is for students to work in small groups to craft a pizza with toppings (no behaviors associated with said toppings) that would make everyone happy/comfortable using non-verbal communication only,’ Quartin added.

Giselle Moore, the group member who corresponded with Quartin and previously had two children in the district, said this was more than a mistake. ‘This went all the way down the chain of command,’

‘I find this all very disturbing,’ she continued. ‘This is stuff that would normally be discussed in a safe place in the home. This is not the school’s job to talk to children about explicit sexual behavior. The school is just normalizing this behavior, hyper-sexualizing children.’

Sophia Arel, the mother of a JFK Middle School eighth-grader, decided to pull her own daughter out of the health class this semester after learning about the pizza assignment.

‘They removed that part of the assignment, but I don’t know what else is going to slip through the cracks,’ ‘It’s vulgar and it’s just inappropriate. First of all, you’re 13, and you don’t even know your sex preferences yet. And when these kids answer these questions, where does that information get shared? Who’s interested?’

My overarching question is why have parents turned over the responsibility of teaching their children when appropriate, issues pertaining to sexuality?

As with any organization in today’s morally collapsing culture, there are sexual perverts and even predators in the school system, thus it is inappropriate for them to be teaching and reaching out to children for their thoughts on sex.