WITHOUT Parents Consent, Teacher Injects Son’s Friend With Covid Vaccine AT HER HOME!

Something weird happens to social justice warriors (SJW) when they are presented with an opportunity to make a decision, possibly including breaking the law, yet if their collective group thinks it is ok and has deemed it worthy of taking the risk so as to advance their cause, they do it.

So even when they appear to be logical, with a history of, a law-abiding life, stories such as administering a COVID vaccine shot, without a license, and without parental consent, shows they feel morally correct, giving the vaccine poke anyway.

This very event took place in Long Island, New York. A biology teacher jabbed her son’s 17-year-old friend with a Covid-19 vaccine without his parents’ permission and it was all caught on video.

Footage made public Monday shows Laura Parker Russo, 54, cleaning the unidentified teen’s skin as she prepared to administer a dose of the J&J vaccine into his right arm.

As Russo smiles, the teen can be heard saying: ‘There you go, at-home vaccine,’ in the video obtained by NBC New York.

The outlet reported the vaccine being the Johnson and Johnson brand, which is only recommended for adults. She stuck the needle into the boy’s arm on New Year’s Eve, police said. The vaccine was authentic, but it is unclear how Parker Russo – who has no medical qualifications – obtained it, and cops are now investigating the matter.

Russo, a Herricks High School biology teacher according to an online bio, was arrested and charged after the teen returned home and told his mother about the shot, according to the Nassau County Police Department.

‘The mother had not given permission or authority to have her son injected with a Covid vaccine and called police,’ a department press release said.

“There you go, at home vaccine”. Police have arrested a Long Island mother for illegally giving a 17 year old boy a shot of Covid vaccine in her home. And there’s video….Only on @NBCNewYork #nbc4ny pic.twitter.com/KpG5vAQaDT

‘After an investigation was conducted, it was discovered that Laura Parker Russo is not a medical professional or authorized to administer vaccines and was placed under arrest without incident.’

The married mother-of-six was charged under state education law with unauthorized practice of a profession. She’s set to appear in court later this month.

Herricks Public Schools superintendent Fino Celano said in a statement that Russo has been removed from the classroom and reassigned as the case is investigated.

Russo is married to John Russo, a Sea Cliffs, New York realtor who in an online bio said the couple was raising a ‘Brady Bunch’ family. She described in her own online blurb being a lifelong Long Island resident who ‘loves her profession as an educator.’

She’s a member of the Sea Cliff Civic Association, which organizes community events in the village 25 miles east of Manhattan. 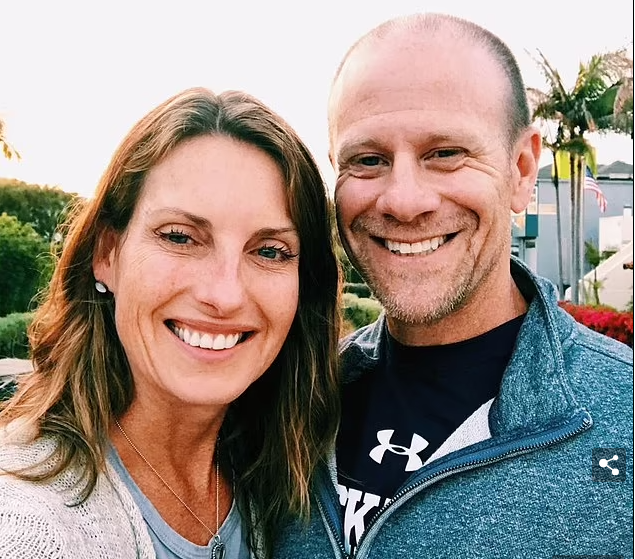 ‘Besides being illegal, it’s just not a smart thing to do,’ he told NBC. ‘An authorized, licensed professional should be providing vaccines to know how to give them properly to make sure if there’s a complication that can be dealt with immediately and very efficiently.’

Nassau County police said they’re not sure how Russo obtained a vial of the vaccine, but that they’re investigating the source.

This case is pretty straightforward, the teacher using her influence persuaded the boy to illegally take the jab thus can no longer be allowed to have access to students moving forward.

It’s time for Laura Parker Russo to find another job, after serving some time in jail.