Attention all criminals, especially those who like to mug/rob people or participate in drive-by shootings, California and Washington are working on reducing the penalties for those who commit such crimes.

A California legislative proposal that would actually reduce the penalty for committing armed robberies in the Golden State is being advanced by WOKE progressives.

CA State Assembly Bill SB 82 would reduce robberies that do not involve a weapon or assault with great bodily injury from felony crimes to misdemeanors. 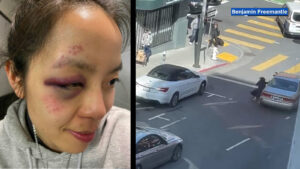 The lawmaker behind the Senate Bill says it will prevent overcharging non-violent criminals. Senator Nancy Skinner introduced SB 82 — KRON4 reached out to her office for an on-camera opportunity to be a part of this conversation, but received a press release that reads in part:

“SB 82 is the product of more than a year of careful consideration by California’s Committee on the Revision of the Penal Code, the membership of which includes judges and other legal experts… The purpose of SB 82 is simple: to clarify state law so that nonviolent cases of theft are not charged as violent felonies.”

The proposed lessening of sentencing is drawing condemnation from a diverse coalition of concerned citizens who oppose the idea — They say it’s dangerous.

This statewide coalition of community leaders, law enforcement officials and, victim’s rights advocates are sounding the alarm warning of what they say will be an incentive for more crimes being committed if the punishment is reduced.

During the virtual press conference, a video was played showing a man being robbed while doing his laundry in San Francisco. They say under current law the suspects would be charged with felonies but not under SB 82.

Washington Democrats are offering up a bill in the state legislature to lower the penalties for drive-by shootings.

Current laws require drive-by shooters to receive an aggravated enhancement charge if arrested and prosecuted. In rare cases, a successful prosecution leads to a life prison sentence for the drive-by shooter who murders someone.

But under a bill proposed for the upcoming Washington state legislature by white, woke state Rep. Tarra Simmons and her co-sponsor David Hackney, the penalties for those committing these heinous crimes, would be reduced, in a move toward “racial equity.”

Yes, you read the preceding correctly. The two legislatures are actually asking their peers to reduce the deterrent against drive-by shootings, trying instead to reduce the number of people of color from getting charged and convicted for doing the shootings instead.

KIRO-TV News reported last July that “80% of shooting victims in King County are people of color,” but the city put its “defund the police” dollars behind an effort to hire social workers as part of a “regional peacekeepers collective.” An additional $140 million was earmarked for “groups that work on BIPOC safety.”

Compounding the effect on the community is the bill is written to be implemented retroactively. This means the drive-by criminals already in prison would be released early, and statistically speaking, right back out on the streets, especially if the laws have been softened.

This is why my fellow Americans all the cities and states currently run by progressive social justice warrior politicians, have and are becoming even more dangerous, demanding anyone who can flee or avoid them completely should do so in 2022.